Education in Afghanistan: IU and 'Three Cups of Tea'

BLOOMINGTON, Ind. -- Indiana University Bloomington School of Education faculty will host a viewing of an Indianapolis speech by Greg Mortenson, the acclaimed author of Three Cups of Tea, Sept. 27 (Monday), which will be followed by a presentation on its ongoing Higher Education Project (HEP) in the war-torn country. Mortenson's speech will be streamed live to IU Bloomington's Wright Education Building's Alumni Room (2277) located on the second floor beginning at 6:15 p.m. 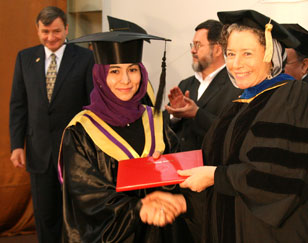 Mortenson, who has worked to build more than 140 schools in remote and volatile regions of Afghanistan and Pakistan, will speak at St. Luke's United Methodist Church in Indianapolis. In Indianapolis, those unable to obtain free tickets to see the presentation live may view the video feed at the Campus Center, Room 409, at Indiana University-Purdue University Indianapolis.

Following Mortenson's lecture, Mitzi Lewison, professor of literacy, culture and language education, and Terry Mason, professor of curriculum studies, will speak about the IU School of Education's work on the U.S. Agency for International Development-funded Afghanistan Higher Education Project. Work began in January 2006 on a five-year effort to rehabilitate higher education in the war-torn country, primarily through improving teacher education programs. Lewison and Mason have worked in the country extensively over the last several years, and Afghan teachers have come to Bloomington to earn master's degrees.

One of the event's organizers said the goal of the discussion following Mortenson's presentation is to open dialogue about education worldwide.

"It's important for students and the public to provide another lens into the complexity of the issue," said Heidi Ross, School of Education professor and director of IU's East Asian Studies Center. Ross is also co-director of the Australian National University-IU Pan Asia Institute, which is sponsoring Monday's event along with the School of Education, and the IU project Voices and Visions: Islam and Muslims in Global Perspective. Mortenson has written two books on his experience, Three Cups of Tea and Stones to Schools.

Mason said he and Lewison will share how the School of Education project is also advancing Afghanistan education.

The Center for Social Studies and International Education directed by Mason hosted a group of 12 Afghan teacher educators from 2007 to 2009 who completed master's degrees in education IU.

"We're working with people who are training the teachers," Lewison said. "Some of the training is for people who are teaching English in the schools, but other parts are for secondary teachers about how to have peaceable conversations, which is not always part of the culture."

Both Lewison and Mason said they're starting to see some tangible results. In March, a ceremony in Kabul marked master's of education graduation ceremonies for 41 Afghans, including those who studied at Indiana University. Through the project, Mason said teacher educators formed an association for math and science teachers across Afghanistan and held their first conference in August that included presentations by Mason and IU math education professor Enrique Galindo.

"Seeing the 250 participants, who constituted basically all the math and science teacher-educators in Afghanistan," Mason said, "you really got a sense that something powerful was occurring."

Lewison said the project now involves 18 universities and has recently expanded to include medical schools. A project manager is working with the medical schools to help faculty learn to speak English.

The primary objective in presenting an update on HEP in Afghanistan is to show students and others even more ways to support countries struggling to rebuild or greatly improve an educational system. Mason said the project has come some distance in nearly five years, overcoming issues of communication, establishing trust with the Afghan people, as well as the myriad other problems confronting the nation.

"The work seemed so vast and difficult in the beginning, but looking back now it's gratifying to see that many of those obstacles have been overcome, and that we are making significant impact in a lot of areas."

Pizza and soft drinks are available at the School of Education viewing and presentation. For more information, contact the Pan Asia Institute at panasia@indiana.edu or 855-0269.