BLOOMINGTON, Ind. -- Sossina Haile knows the heat of the sun can be used to convert water and carbon dioxide into energy that can be stored in a fuel cell. She's such a believer in the technology that she once brought her point home by drinking, on camera, the tailpipe emissions from a fuel-cell car. 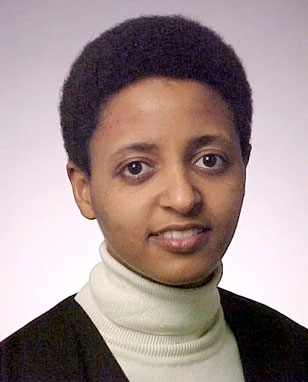 Her appearance on the topic "Creating a Sustainable Energy Future" will focus on mitigating climate change with carbon-neutral fuel cell technology. It is being presented under the auspices of the IU Office of Women's Affairs' Outstanding Women in Science Lecture 2010.

"Remarkably, more energy from sunlight strikes the earth in one hour than all of the energy consumed on the planet in one year," Haile noted in a synopsis of her upcoming lecture. "Thus, the challenge modern society faces is not one of identifying a sustainable energy source, but rather one of capitalizing on the vast, yet intermittent, solar resource base."

In 2006, Haile discovered that cerium dioxide (ceria) was an excellent catalyst for fuel cell anodes and that by applying electrical voltage to the ceria and measuring the AC electrical current, researchers could quantify the current carried by the electrons. Knowing conductivity amounts is critical for any application where materials are sought to conduct only ions, particularly as electrolytes in fuel cells.

"There's nothing better than being able to combine an intellectually exciting topic with the knowledge that it will be beneficial," Haile told Newsweek magazine after the discovery. "To me, that's just glory."

Her appearance is being made possible by the IU Office of Women's Affairs and its Women in Science Program and the National Organization for the Professional Advancement of Black Chemists and Chemical Engineers. A mother of two, Haile fled Ethiopia as a child with her family after soldiers arrested and nearly killed her father during a military coup in the mid-1970s. She publicly espouses the belief that "science should be in the service of society."

Both the lecture, scheduled from 3-4 p.m., and a 4-5 p.m. reception in the Indiana Memorial Union solarium are free and open to the public.

Haile received her B.S. and Ph.D from MIT, and an M.S. from the University of California Berkeley. Before joining the Caltech faculty in 1996, she spent three years as an assistant professor at the University of Washington, Seattle. Haile has received the NSF National Young Investigator Award, Humboldt Fellowship, Fulbright Fellowship, and AT&T Cooperative Research Fellowship.

The Humboldt and Fulbright fellowships supported her research at the Max Planck Institut für Festkörperforschung (Institute for Solid State Research), Stuttgart, Germany. She is also the recipient of the 2001 J.B. Wagner Award of the High Temperature Materials Division of the Electrochemical Society, the 2000 Coble Award from the American Ceramics Society and the 1997 TMS Robert Lansing Hardy Award.