The dedication will take place at 1:30 p.m. in Cedar Hall Auditorium, part of the Union Street Center, which opened its doors at the start of the fall 2010 semester. Following the ceremony, there will be a reception in the center's atrium and tours of the facility. 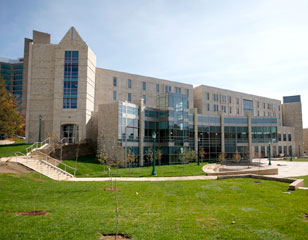 Amenities include fitness areas, the Hoosier Café and Store, a Hutton Honors College residential community, a student government office, classrooms and seminar rooms, and, in Cypress Hall, courtyard views from every apartment.

The $70 million facility houses 827 residents in seven buildings, all named after trees that dot what has been called one of the nation's most beautiful campuses: Hickory, Birch, Cedar, Linden, Cypress, Beech and Pine. The buildings are located within easy walking distance of all parts of campus.

The center is constructed of split-face Indiana ashlar limestone from nearby quarries. The design reflects the "collegiate Gothic" style prevalent on the IU Bloomington campus. The architectural firm for the project was RATIO Architects of Indianapolis; the general contractor was F.A. Wilhelm Construction Co. of Indianapolis.

Note to media: Several housing units at Union Street Center will be open for viewing and photography after the reception. Student residents will be available to interview.