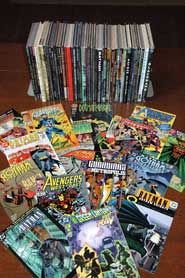 The Lilly Library exhibition of the Michael E. Uslan Collection of Comic Books and Graphic Novels runs through Dec. 17.

IU alumnus Michael Uslan, producer of the most recent Batman installment as well as the previous three Batman movies, will return to the IU Bloomington campus for a series of events celebrating the exhibition and exploring America's fascination with comics and comic book heroes.

The Lilly Library exhibition, "Comics as Cultural Mythology: The Michael E. Uslan Collection of Comic Books and Graphic Novels," opens on Monday (Sept. 12) and runs through Dec. 17. It is open to the public, and admission is free.

In addition to meeting students and talking to IU classes about the entertainment industry, Uslan will discuss the influence of comic books on American culture at a public event at Alumni Hall in the Indiana Memorial Union on Monday (Sept. 12) at 8 p.m.

"Comic books are contemporary American folklore," Uslan said. "The ancient gods of the Greeks and the Norse still exist, only today they're clad in spandex, capes and masks."

To honor the exhibition, Bloomington Mayor Mark Kruzan will proclaim the week beginning Monday (Sept. 12) to be "Batman Week." 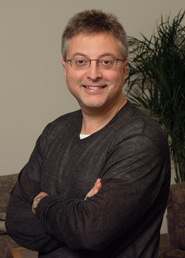 As an IU student in the early 1970s, Michael Uslan created the first college-accredited course on comic books.

Uslan gained national publicity as an IU student in the early 1970s when he created the first college-accredited course on comic books and wrote the accompanying textbook, The Comic Book in America. As a result, he was able to make his childhood dream come true when DC Comics offered him a writing job. He has since written a host of Batman and other comics titles, as well as numerous books including America at War -- A History of War Comics and Mysteries in Space -- A History of Science Fiction Comics. Uslan received an Emmy Award as executive producer of the popular children's series Where on Earth Is Carmen Sandiego?

In 2001, Uslan donated approximately 30,000 comic books from his prized collection to the Lilly Library. The upcoming exhibition will feature a portion of that collection, which includes not only popular comics related to superheroes but also graphic novels, comic art and mythology.

"There has always been more to comics than superheroes," said exhibition curator Mike Cagle. "From Beowulf and Thor to Conan the Barbarian and Wagner's Ring Cycle, mythology of various kinds has always been a rich source of ideas and material for comics storytellers."

Uslan will meet with students from the Kelley School of Business, the Department of Telecommunications, the School of Law-Bloomington and the Film Studies Program. He will also speak to students in "The Superhero in America," a course offered by the American Studies Program.

The Lilly Library exhibition, "Comics as Cultural Mythology: The Michael E. Uslan Collection of Comic Books and Graphic Novels," runs from Monday (Sept. 12) through Dec. 17. Hours are Monday to Friday, 9 a.m. to 6 p.m. and Saturday, 9 a.m. to 1 p.m. Admission is free.

The university's Union Board will host "From Bloomington to Hollywood," a public presentation by Uslan followed by a question-and-answer session, on Monday (Sept. 12) at 8 p.m. in the Indiana Memorial Union's Alumni Hall. Admission is free.

Screenings of Batman will take place Thursday and Saturday (Sept. 8 and 10) in the IMU's Whittenberger Auditorium at 8 p.m. and 11 p.m. On Friday (Sept. 9), Batman Begins will be shown there at 8 p.m., followed by Batman at 11 p.m.

Coinciding with the Lilly Library exhibition, Bloomington Mayor Mark Kruzan will proclaim the week beginning Monday (Sept. 12) to be "Batman Week" in Bloomington.