BLOOMINGTON, Ind. -- In the world of organ music, everything eventually comes back to Bach. 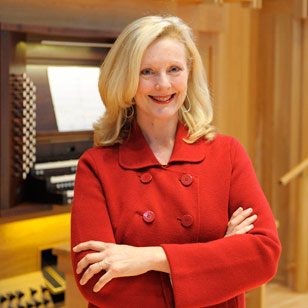 Over the span of three years, starting Oct. 5, 2010, at Auer Hall, Janette Fishell will play the organ works of J.S. Bach.

"Every single student who crosses my path -- from the beginning of my teaching them to the last day -- the one common denominator we have in the repertoire we work with is Bach," said Janette Fishell, chair of the Organ Department at Indiana University's Jacobs School of Music. "It all comes down to Bach. Bach, to me, is the common ground between the esoteric world of the organist and the rest of the world."

Commencing with a free concert at Auer Hall Oct. 5 at 8 p.m., Fishell will present "The Seasons of Sebastian: The solo works of Johann Sebastian Bach," a three-year cycle of 21 free, open-to-the-public Bach organ performances that take place at various locations on campus and churches in the Bloomington community. The works are organized into "secular" -- the seasons of Bach's life, performed on the IU campus -- and the "spiritual" seasons of his faith, performed at area churches, with some "cross-pollination" to keep each concert as artistically significant as possible.

Jacobs School of Music Dean Gwyn Richards said that Fishell's performances will allow audiences to experience the evolution of Bach's body of work throughout different eras. "It's always fascinating to study an individual artist and their output from beginning to end," Richards said. "There's such a great richness in this repertoire -- and there aren't too many people who would undertake a journey like this. It takes courage, dedication and discipline. Janette is to be admired for having the courage to undertake such a big mission."

Scholars don't agree upon what constitutes "the complete works of Bach." Many of the works attributed to the German composer (1685-1750) come from copies, not signed manuscripts, and in some cases, it's unclear which pieces were written by Bach alone and which may have been completed by his students.

"I'm not actually calling this a performance of the complete works of Bach, but it will include what many would agree are the works most commonly accepted as the official 'canon' of organ works," Fishell said. "So, from that point of view, it could be considered a performance of complete works in as much as anyone can determine what that means."

'I just wanted to live with Bach'

Fishell said a strange coincidence led to her decision to tackle the 300 works (ranging from 40 seconds to 15 minutes each) she'll perform in the series. In 2008, the fall of her first year at the Jacobs School, Fishell was asked by four separate venues in different cities to play all-Bach organ programs. "It certainly wasn't something I had suggested to people. It was just odd that it happened in the same cluster of weeks," she said.

Maidee H. and Jackson A. Seward Organ was officially dedicated at Auer Hall on April 30, 2010.

The final Bach recital left Fishell energized and thinking about her next big project. She knew that spring of 2010 would herald a new day for Bloomington with the installation of the Fisk Organ at Auer Hall.

"It came to me that I wanted to just live with Bach," Fishell said. "The Fisk Organ would make it possible for people in Bloomington and from the region to experience the organ who hadn't really experienced it before. I was also thinking, 'What can we as organ faculty do to reach out to a new community of audience members and introduce them to the organ?' These separate ideas and strands came together for me with Bach."

The Oct. 5 concert (with four sections, from "The Schoolboy: An Auspicious Beginning" to "The Judge: Sublime Summation") is one of the "secular" programs that will be presented on campus. Additional recitals will be performed on instruments in other campus venues, including the Van Dahlen organ of Beck Chapel, and works for manuals alone played on the organ in the Atrium of the IU Art Museum and the IU Auditorium's historic Hall of Murals. The performances at area churches will celebrate the composer's spirituality and devotion to his Lutheran faith, including the chorale settings Bach wrote when he was a church musician.

At her second concert, Dec. 12, Fishell will perform "Music of Longing and Joy" at Trinity Episcopal Church on Kirkwood Avenue prior to Christmas, featuring Nun kom der Heiden Heiland (BWV 659, 660, 661), Orgelbuchlein Chorales for Advent, Christmas, and Epiphany and Fuge on the Magnificat (BWV 733).

'Each dish has to be just right'

Fishell likens her preparation for the Bach project to preparing "the largest banquet you can imagine for hundreds of people."

"Each dish has to be just right when it's served," she said. "Dessert can't be ready right now -- I'm still working on the appetizers." Unlike a Broadway actor who learns a role and fine-tunes that role each night during the performance, Fishell said, she is putting herself in the position of always learning and playing, then moving on. "As an artist, you want to play something in public and then play it at least five times immediately to really live with it. This is more like a continually evolving one-woman show."

Working through Bach's repertoire in this way is a new experience for Fishell as an artist, and one she said she's happy to have. "I would not want to live the rest of my life like this, but I think for the next three years . . . I know I won't get bored."

Spending so much time learning Bach's organ works has made Fishell a better teacher, giving her a greater depth of understanding about the learning process. "Many times I have felt like this infant student before this music -- it makes anybody humble," she said. "I have much more understanding of what my students go through every week, having forced myself into this 'Bach boot camp' for an intense period. This project just found me and then, once I committed to it, I haven't looked back."