WHAT: Rent. Music, lyrics and book by Jonathan Larson. Directed and choreographed by George Pinney with musical direction by Terry LaBolt.
WHEN: Opens Friday, Oct. 8, at 7:30 p.m. Additional performances are Oct. 9, Oct. 12-16 at 7:30 p.m. with a matinee performance on Saturday, Oct. 16, at 2 p.m.
WHERE: All performances take place at the Ruth N. Halls Theatre, Lee Norvelle Theatre & Drama Center at 275 N. Jordan Ave. No photography or recording of any kind is permitted during performances. Note: This production contains mature content.
TICKETS: Regular admission is $22 for adults, $15 for students, $16 for senior citizens; Student Rush Tickets: $10 cash with a valid IU Bloomington student ID on the day of each performance. Special $10 "RENT-heads" tickets will be available in the first two rows of the theater reserved for sale first-come-first-served beginning one hour prior to each show. 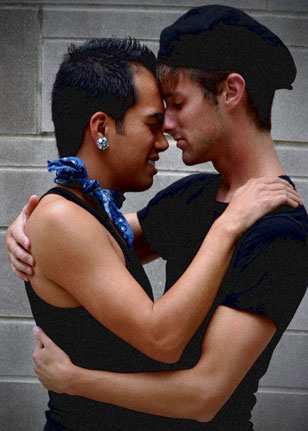 LaBolt said he has long avoided the musical Rent but that now -- more than 20 years after he was diagnosed with AIDS in 1986 -- he's ready to talk about it. " I watched my friends grow pale, go blind, or get pneumonia or cancer, and die," LaBolt wrote. "Slowly. Painfully. Dozens and dozens of them . . . I had several months to figure out how to communicate this to a cast of young actors here at Indiana. But I knew that in order for them to understand the piece, I would have to share my experiences."

Rent is a modern version of the timeless Giacomo Puccini opera La Bohéme, following a diverse community of friends, artists and musicians who are struggling to get by and celebrate life in New York while facing the devastating world of AIDS, addiction, homophobia and homelessness. 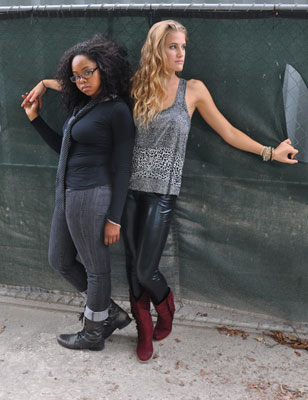 IU student actors pose during a rehearsal for "Rent," the 2010-2011 season opening performance.

Pinney said he has long awaited this opportunity to direct Rent. "Rent is not only an exciting rock opera. Rent is incredibly relevant today," Pinney said.

"It seems the world is becoming complacent about AIDS and HIV infection, especially among our youth. Rent opens a door to understanding the magnitude of this disease. The production's dramatic action, theatrical punch, music, acting, staging -- all of it -- brings together a focus on what it was like in 1989. More exciting about this production is that it is a community effort bringing together Positive Link (an organization that offers care for people living with HIV/AIDS), the Kinsey Institute and Gay Lesbian Bisexual Transgender Student Support Services (GLBT) on the IU campus, all contributing to an environmental piece. Rent is an exciting, life-changing evening of theater."

The IU production of Rent will be augmented by several social awareness outreach events:

To see information about the entire cast and production team, and the rest of the 2010-2011 season of award-winning plays, visit theatre.indiana.edu.