BLOOMINGTON, Ind. -- The Indiana University Marching Hundred is competing against 17 other college marching bands to win $25,000 -- and the chance to see the Marching Hundred video on national television. 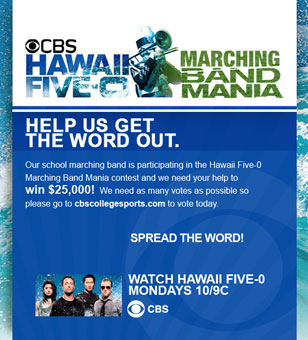 All 18 bands played the theme song from the pilot CBS television series "Hawaii 5-0" (airing Mondays at 10 p.m.) Along with the money, the winning band's video will air during a future episode of the program.

Director of Athletic Bands Dave Woodley was contacted in the summer of 2010 to see if the Marching Hundred would be interested in preparing the "Hawaii 5-0" theme. After checking the schedule, Woodley accepted the challenge.

The video was shot Sept. 16 at IU's Memorial Stadium and was uploaded to the CBS contest via YouTube that weekend.

"It was a lot of fun to put together," Woodley said. "The kids had a great time with the filming, and our video staff did some wonderful editing. We're all very proud of the final product."

The voting period extends to 10 p.m. on Monday, Oct. 4. At that time, all 18 bands will be judged by a panel of experts on musicality, originality of concept and entertainment. Fan votes will also play a large factor in the committee's decision.

"We're asking all Hoosier fans -- and fans of IU in general -- to go to the website every day and vote for the Hundred," Woodley said. "This has been a lot of fun already, but we need the public's help in having a strong showing for CBS."

Votes are being tallied at "cbscollegesports.com." Participants can vote one time per day throughout the next week.

The Marching Hundred, a major ensemble in the IU Jacobs School of Music, is made up of 285 musicians and dancers, and performs at all home football games and selected away games each season. In 2007, the Marching Hundred received the Sudler Trophy, the highest award a college marching band can earn.