BLOOMINGTON, Ind. -- Across the nation and around the world, people in more than 50 cities will observe the 8th International Home Movie Day in October. 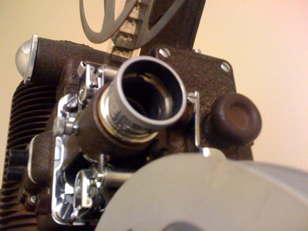 In Austria, cinephiles are invited to bring their old equipment for inspection and repair, while attendees at the Home Movie Day in Spain are invited to send their home movies in ahead of time and see them screened in Salamanca.

For the second year in a row, Bloomington will take part in Home Movie Day. On Oct. 17 the Indiana University Department of Communication and Culture and the IU Cinema will co-present a Home Movie Day celebration from 3-5 p.m. at IU's Radio-TV Building (Room 251). The event is free and open to the public.

Equipment will be available for screening 8mm, 16mm, Super 8, VHS and DVD films, and the event will also include screenings of home movies from the IU Archives.

The Center for Home Movies initiated Home Movie Day as a means of highlighting both the cultural significance of amateur films and filmmaking and the need to properly preserve these important artifacts.

"It is a privilege for IU Cinema to co-sponsor this year's event with the Department of Communication and Culture," said Jon Vickers, director of the IU Cinema, which is scheduled to officially open in January.

"Home movies have been an important part of families' lives since the 1920s," Vickers said. "The event provides a communal environment to share these historical moments of everyday life, which can tell us much about the times, our environment and maybe even something about ourselves. I plan on bringing some of my 8mm road movies to share."

Dwight Swanson, spokesperson for the Center for Home Movies, said the event's public screenings evoke significant discussions and new discoveries. At the 2006 Home Movie Day in New Orleans, a curated screening brought attention to Think of Me First as a Person, a powerful home movie documentary in which a father recorded his developmentally disabled son's early childhood. The film was subsequently named to the Library of Congress National Film Registry in 2007. In 2007, a second Home Movie Day rediscovery, Our Day, by 1930s Kentucky filmmaker Wallace Kelly, was also named to the registry.

Home Movie Day has gained fans both well-known and more obscure. "Home Movie Day is important because our lives, our recollections, and our truth is recorded in home movies," actor-writer-director Steve Martin has said. "One day, what the heck, c'mon!"

Author Cory Doctorow, a blogger and co-editor of the website BoingBoing.net describes Home Movie Day as "a fantastic idea," adding "Content isn't king, conversation is -- and what better conversation-starters than the significant moments of your neighbors' lives?"

Gary Meyer, co-director of the Telluride Film Festival, said home movies offer an essential, unique view on personal, community and cultural histories. Meyer said that in Private Century by Czech filmmaker Jan Sikl (a hit of 2008's Telluride Festival) Sikl "has found collections of home movies and then researched the family diaries and archives to learn the fascinating stories behind the films. He now can tell the powerful stories covering multiple generations exclusively using the actual footage of the people involved." Sikl is just one of an increasing number of documentary filmmakers making use of vintage home movies in new productions.

Home Movie Day is the world's leading effort to honor and preserve small format films. Intended as a "bring-your-own-film" event, everyone is invited to bring their home movies in any format to the campus venue, where projectionists and equipment will be on-hand to project the film. The event encourages audience discussion of the films, the filmmaker and the images shared.