BLOOMINGTON, Ind. -- A recently-published report on best practices in "internationalizing" teacher education notes the Cultural Immersion Projects at the Indiana University School of Education as an innovative program among three profiled. "Internationalization of Teacher Education: Three Case Studies" is a publication of NAFSA: Association of International Educators written by Charlotte West. 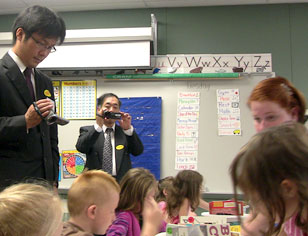 A group of faculty from Hiroshima University in Japan visit Fairview Elementary in Bloomington last week. They came to meet with the second IU student traveling to Japan as part of the new Cultural Immersion Project there.

West profiles the Cultural Immersion Projects along with a program requiring an international experience for all graduate students at the University of San Diego and the creation of an international infrastructure within the University of Maryland College of Education. The article notes that around a quarter of all IU School of Education undergraduate students participate, and it's the third-largest study abroad program on the IU campus.

"As new teachers graduate from schools of education, their task is not only to adopt a global perspective in their instruction, but also to transfer that awareness to their own K-12 students," West writes.

The Cultural Immersion Project's Overseas Project sends student teachers through a rigorous program, including a preparatory phase spanning at least two semesters, followed by a minimum of 10 weeks of student teaching in Indiana. Students then travel abroad for eight weeks of full-time teaching in a host-nation school, coupled with community participation, cultural study, service learning and academic reporting.

Students can choose from 15 countries, ranging in diversity from Australia to Turkey to Wales to Ecuador. There are two other programs under the Cultural Immersion Projects: The American Indian Reservation Project, which sends students to teach on the Navajo Reservation in Arizona, New Mexico and Utah, and the Urban Project, which places students in inner-city Chicago public schools.

"Invariably, students tell me this is one of the most transformative experiences they've had," said School of Education Dean Gerardo Gonzalez. "It makes them better teachers, and their students benefit immensely from the global perspective they bring back to school classrooms in Indiana and elsewhere in America."

The Cultural Immersion Project started in 1972 at IU with the Navajo Reservation program. Within a few years, students began going to English-speaking countries. Now participants spread across the globe.

"We can learn so much from each other, but people need to be willing to step outside their comfort zone and go into a context that's very different from anything they've experienced before," said Laura Stachowski, director of the Cultural Immersion Project since 1994. "They're going to be a minority in terms of race, culture and language in many of the places that they're going to, but they're going to be better people and certainly better teachers for having had these experiences.

"We've wanted to expand the nature of the placement sites from primarily the English-speaking, British model of education, to give people opportunities to go to places like Kenya, Russia, Spain, Costa Rica, Ecuador, Japan, China, Turkey, and India," Stachowski continued. "It has just increased the opportunities education majors have to get out and see the world and learn about how other people educate their children and what they value in life and for these student teachers to better understand their role as an educator in a global context."

"We've already had one student from Indiana University go to Japan this past spring, and I've got one going in October and another one going in March," Stachowski said. "It's definitely an established connection. We could not do this without the interest and support of university and school personnel in these host nations and in our domestic placement sites."

The full report from NAFSA is available online at https://www.nafsa.org/resourcelibrary/default.aspx?id=18486.

More about the Cultural Immersions Project is available at https://education.indiana.edu/cultural/strongCulturalImmersionProjectsstrong/tabid/4184/Default.aspx.