A Saturday (Oct. 2) workshop at the Indiana University School of Education will emphasize best practices for implementing and advocating for teaching world languages in schools. The Indiana Network for Early Language Learning (IN-NELL) and "Bridges: Children, Languages, World," a project of IU's Center for the Study of Global Change, are holding their fall conference from 9 a.m. to 4 p.m. in the Wright Education Building at 201 N. Rose Ave. 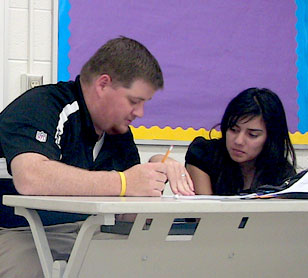 The Indiana Network for Early Language Learning (IN-NELL) and "Bridges: Children, Languages, World," a project of IU's Center for the Study of Global Change, are holding their fall conference Oct. 2.

Sessions are focused on helping teachers, education leaders, parents and others learn about the latest developments in teaching foreign languages to students in early grades, as well as how to best promote their implementation in schools.

Laura Terrill, former foreign language and English as a second language coordinator in a St. Louis school district, will open the session. Jacqueline Bott Van Houten, the world languages consultant for the Kentucky Department of Education and vice president of the National Network for Early Language Learning (NNELL), will deliver a keynote address on the national movement in early language learning. Other sessions include School of Education Associate Professor Martha Nyikos discussing best practices in the classroom. The director of the Center for Language Technology and Instructional Enrichment (CeLTIE) at IU, James Chan, will cover the latest technology for teaching foreign languages. Longtime educator, administrator, and education consultant Victor Smith will present about how to best advocate for world language programs.

"Institutional support of any foreign language instruction for young learners has been at odds with industrial and federal claims regarding the strategic importance of learning a second language for decades," said Naomi Spector, Bridges project coordinator and conference coordinator. "And instruction in less-commonly taught languages, like Arabic or Chinese, remains almost fixed at the university level."

Spector added that she often hears from those working with these languages at the university level that they wished they had begun learning languages earlier in life.

"It is our hope that this conference will not only be a place for seasoned and emerging teachers to develop their skills, but also will be a place for every type of person concerned with the future of foreign languages in our communities to explore where they fit in changing this picture," Spector said.

Registration on site is $55, but just $30 for full-time students. The payment includes membership in the NNELL as well as lunch on Saturday. Graduate students at the IU School of Education may attend at no cost. Parents can come to the 2 p.m. advocacy session with Victor Smith for free and their children may attend a special language camp concurrently. In the camp, children will get exposure to Russian, Chinese, Arabic, Spanish, and Mongolian languages.

Educators, lawmakers, and business leaders consider foreign language education a critical issue to future economic growth and national security. On Sept. 12, two U.S. House members introduced the "Excellence and Innovation in Language Learning Act," with the goal of making students proficient in a second language in addition to English within a generation. If it becomes law, states would have two years to develop a model for their students.

Nyikos said that educators and others should advocate for fostering interest and instruction in languages such as Arabic, Pashto, and Swahili, identified by the U.S. Department of Defense as among the "critical languages," and that not enough U.S. citizens speak these languages fluently.

"Likewise, many of the children who come into our ESL programs are fluent in these critical languages, but we don't foster further language maintenance in these languages due to shortsightedness and budgetary concerns -- until momentous events or crises strike," Nyikos said.

IN-NELL is a language group made up of teachers, pre-service teachers, university faculty, and those who may be supporters or "friends" of early language learning. The goals of the organization are to provide quality professional development, predominantly to K-8 world languages, while also reaching out to educate the community regarding the importance of early language learning and quality world language programs at the elementary/middle levels.

Bridges facilitates the development of foreign language instruction programs for children, emphasizing less commonly taught languages. It stresses the development of highly interactive classes that are free to children and their families. Partnering with entities such as Monroe County Public Library, the Center for Chinese Pedagogy or the Bloomington Project School, and working with faculty the Department of Literacy, Culture and Language Education at IU's School of Education, Bridges mentors IU students as they develop strategies for teaching these often complex languages to very young learners.

More information is available on the conference website, https://www.indiana.edu/~global/bridges/fallEvent2010.php.