BLOOMINGTON, Ind. -- The National Institute of Environmental Health Sciences has awarded $2.27 million to Indiana University researcher Joseph Shaw for a five-year study of how the environment alters genetic information through mutation and natural selection. 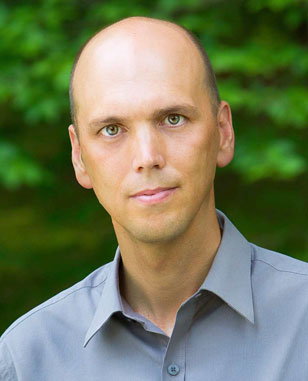 The grant comes from the NIEHS Outstanding New Environmental Scientist (ONES) program, which seeks to transform environmental research by identifying talented and creative scientists, encouraging and nurturing their innovative research, and supporting their long-term commitment to furthering the understanding of the impact of environmental exposures on human health.

Shaw, an assistant professor in the IU School of Public and Environmental Affairs, is the first Indiana University faculty member to be recognized by the ONES program.

He will lead studies that examine gene copy number variation (CNV) in the lake and pond dwelling crustacean Daphnia, commonly called the water flea, one of a handful of model organisms approved by the National Institutes of Health for biomedical research. Recent research has found that genetic differences between individuals of an animal population, including humans, are predominantly from genes that are duplicated or deleted from genomes, the full collection of DNA that prescribes the functions of a cell.

"We have identified natural populations that have experienced substantial environmental stress for over a century," Shaw said, speaking of research that he and his colleagues have conducted on lakes near industrial-scale mining operations. "The studies will now assess how some populations have adapted to cope with chemical changes to the environment, or have been harmed by effects linked to changes in the number of gene copies. Answers to these questions have profound implications for the long-term health of human populations that are living longer and doing so in the presence of a greater diversity of chemicals in our water that can modify DNA."

The award is unusual in that it funds basic research on how the environment can change an individual's susceptibility to disease rather than focusing on understanding the cause of a specific disease or the effects of a singular class of chemicals. Undergraduate and graduate students, research staff and postdoctoral investigators will be employed to work on the project.

One consequence of the Human Genome Project and other genome sequencing studies that decode the genetic make-up of living organisms has been an awareness that the quantity of gene copies can vary from one individual to another. Furthermore, there are strong associations between gene copy number variation and a wide array of diseases, including autism, Alzheimer's disease, epilepsy, HIV susceptibility, lupus, Parkinson's disease and schizophrenia.

The impact of the environment on gene copy number remains unknown, however, in part because appreciation of the significance of CNV is so new. Also new is the toolbox needed for advancing environmental genomics research at an unprecedented pace. Researchers at Indiana University lead an international consortium, the Daphnia Genomics Consortium, devoted to obtaining high-throughput genetic data from natural populations of Daphnia. The toolbox they are developing is unique to the environmental sciences and now includes genome sequences, reagents, protocols and databases needed to simultaneously measure and interpret the condition specific action of all genes of the water flea.

"The return on past investments by IU towards fostering cross-disciplinary genomics research is phenomenal," said John Colbourne, genomics director of the IU Bloomington Center for Genomics and Bioinformatics and co-founder of the Daphnia Genomics Consortium. "This newly awarded project can potentially bridge two fields of research -- biomedical and environmental sciences -- that have traditionally worked apart.

"The promise in studying the genetics of Daphnia populations is that we may better understand causal associations between environmental conditions, the composition and function of genomes, and disease," Colbourne added. "Translating results from this research to humans rests on the great insight of the last 15-20 years in biology -- that fundamental genetic pathways are very similar in all organisms."

The IU studies will include working with Daphnia populations that developed tolerance to extreme exposure to toxic metals, including cadmium, in heavily polluted mining regions near Sudbury, Ontario, Canada. The unique biology of Daphnia will enable researchers to map genetic changes that took place in Daphnia populations in the past and associate the changes with changes in environmental exposure.

The grant builds on past training and support for Shaw's research career. He was an NIEHS Fellow while in graduate school at the University of Kentucky and an NIEHS-funded postdoctoral researcher with the Dartmouth College Superfund Basic Research Program. He has since 2004 been a summer research associate at Mt. Desert Island Biological Laboratory in Maine, and he came to IU Bloomington in 2007 with support from IU's Commitment to Excellence program, which funded the creation of faculty positions for research across its schools and departments in environmental sciences.

The ONES award supports not only a defined research project but also activities and training that enhance the long-term research goals of the investigator. Shaw will take advantage of this aspect by teaming with Michael Lynch, Distinguished Professor of biology at IU Bloomington, and Michael Pfrender, associate professor of biological sciences at the University of Notre Dame.

Lynch, a fellow of the National Academy of Sciences, will lend his expertise in assessing the spontaneous accumulation of mutations. Pfrender, faculty director of the Genomics Core Facility at Notre Dame, will provide assistance in producing genetic crosses of Daphnia that will help uncover the biological effects of CNV. These collaborations will enhance the environmental genomics toolbox to apply to future research on environmental health questions.

"This project would not be possible without the resources and support provided by Indiana University and SPEA and the expertise available on this campus, especially the technical capabilities of the IU Center for Genomics and Bioinformatics," Shaw said. "I'm also grateful for the NIEHS-funded training opportunities I have been afforded. Now we have some exciting work to do."

The National Institute of Environmental Health Sciences is one of 27 institutes and centers that make up the National Institutes of Health (NIH), the primary federal agency for conducting and supporting basic, clinical, and translational medical research and investigating the causes, treatments, and cures for diseases. For more information on NIEHS, see https://www.niehs.nih.gov/.

To speak to Shaw, contact Jana Wilson at the School of Public and Environmental Affairs, 812-856-5490 or wilsonjs@indiana.edu.