". . . Any thing so overdone is from the purpose of playing, whose end, both at the first and now, was and is, to hold, as 'twere, the mirror up to nature; to show virtue her own feature, scorn her own image, and the very age and body of the time his form and pressure."

BLOOMINGTON, Ind. -- The language is obscure, the plot twists strange and the settings archaic -- so why, hundreds of years after his death in 1616, are people still so passionate about the words of William Shakespeare? 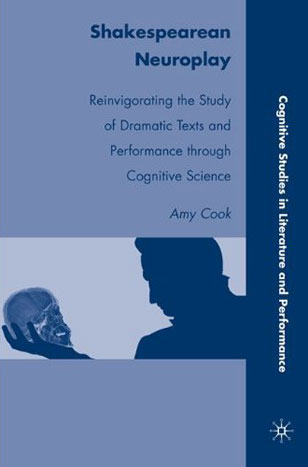 What fascinates Cook about Shakespeare is that despite the poetic language and odd turns of plot in a world that has nothing to do with modern life, Shakespeare's works remain relevant.

"We still do it, we still love it, we still study it, we're still excited by it," Cook said. "How on earth is that possible? I don't know what was going on in the brains of people of the globe in 1602, but it's pretty exciting to me that our brains still get excited listening to Hamlet."

Cook describes conceptual blending as a theory of language and cognition through which various thoughts and relationships merge almost invisibly in an unconscious process that happens in everyday thought and language, leading to creativity and innovation.

During her doctoral work at the University of California-San Diego, Cook said, she had the good fortune to study with experts in the field including distinguished research professor of cognitive science Gilles Fauconnier, who, along with Mark Turner, articulated the theory of conceptual blending.

In the book, Cook uses Hamlet's description of theater as a mirror that can "show virtue her own feature, scorn her own image, and the very age and body of the time his form and pressure" to lay out a precise methodology for using cognitive linguistics to understand text and performance.

While many people do interdisciplinary work that uses cognitive science to understand the humanities, there hasn't been much work that explains how to set up a method for such analysis.

Shakespearean Neuroplay offers researchers a guide for how to apply conceptual blending to text. In addition, Cook said, there's a reading of Hamlet facilitated through her book that could be of interest to people studying literature who have no interest in cognitive science, and the book also contains an analysis of performance that could be of interest to directors or performers.

How we think is how we talk, Cook said. But why do we think the way we think and why do words mean what they mean?

"It starts with the everyday things we talk about -- 'She got out of bed and got into the shower.' Why is it we think about bed as a container we get out of and the shower as a container we get into? Why do we 'come out of sleep?' None of these things make sense, but once you see the underlying metaphor necessary to understand these things, they link together in really exciting ways," she said.

Cook references a seminal 1930s analysis of Shakespeare, Shakespeare's Imagery and What It Tells Us by Caroline F Spurgeon, and that book's discussion of disease metaphors in Hamlet ("Something is rotten in the state of Denmark"). That was an important point -- but that's where the author's analysis stopped, Cook said. Cognitive linguistics takes the logic a step further, pursuing what "disease" means.

"Why do we think of disease as war and infection as invasion? It's important to understand: What is the embodied schema that we're using to make -- to create -- this meaning? Anyone who studies coinage of terms, the development of language, is partly studying these associations."

Cook explained that previous cognitive linguistic theory took a simple construct -- "The cat is on the mat," for example -- and said that the brain puts together the noun-plus-verb combination to form an algorithmic idea of language.

"Certain cognitive linguists came along and said, who cares if you understand 'The cat is on the mat?' How do you understand the purpose of playing is 'to hold the mirror up to nature?' How do you explain 'the beach is safe,' for example? Safe from what? Safe to whom? Most of the sentences we use in our day-to-day life are not algorithmic, they're poetic and metaphoric -- and are foundationally creative," Cook said.

Although her Ph.D. is in theater, Cook took classes in UCSD's cognitive science department and has always considered her work interdisciplinary.

The power of language remains an endless source of fascination to Cook, particularly as it applies to politics and the coinages used to influence debate. "There has been work integrating cognitive linguistics into politics because how we talk is how we think, and so shaping the terms of the debate is more than half the battle," she said.

Cook sees it as miraculous that current cognitive science and theories in cognitive linguistics offer ideas on why people's brains perk up when listening to the words that intertwine to form the oft-quoted passages of Hamlet.

"Hamlet may use the image of a mirror held up to nature to communicate to the player that the play should be performed naturalistically, without a lot of air-sawing and what we would call now over-acting, but 'a mirror held up to nature that can show virtue her feature' is a very different kind of mirror than the one I'm used to." If you literally hold a mirror up to nature, you get grass and trees, or the word "nature" spelled backward, she said.