BLOOMINGTON, Ind. -- Indiana University will partner with Berlin's DEFA Foundation to present a series of films and discussions on the cinematic traditions of East German cinema before and after the fall of the Berlin Wall and German unification. 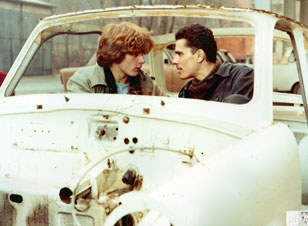 "Vorspiel" (Courtesy of the DEFA Foundation)

Helmut Morsbach, director of the DEFA Foundation, will launch his U.S. visit with a film series at IU for this reflective finale to the 20th anniversary of German unification. He will travel to Bloomington from Germany with several rediscovered films and some U.S. premieres for IU's DEFA Dialogues series this fall.

With more than 900 titles in its catalogue, Berlin's DEFA Foundation is charged with preserving and distributing East Germany's film output from 1946-1992.

"The films represent the final reflection on Germany's 1989-90 transition and the works of cinematic art caught in the shifting political circumstances of the GDR (German Democratic Republic) and its aftermath," said Brigitta Wagner, director of the 2010 DEFA Project and an assistant professor of Germanic Studies and Cinema, Communications and Culture and Film Studies. Wagner said the films are of varying legacies -- Carbide and Sorrel is fairly well known, while Locked Up Time and Vorspiel are unique documents of a culture in transition. Sammelsurium has been "all but lost to English-language audiences since it played at the Berlin Film Festival" in the early 1990s, and Windows on Monday is an example of an exciting new direction in the art cinema of unified Germany, she said.

Last year's DEFA Project at IU -- a four-month research, teaching and outreach initiative -- culminated with an international symposium of film scholars, practitioners, cultural politicians and graduate students, as well as a film festival titled "Making History ReVisible: East German Cinema after Unification" that was offered in conjunction with a symposium for Indiana high school students.

"While the scholars of 'Making History ReVisible' concluded that we needed to have more English-language access to films by DEFA's female filmmakers -- as well as to lost non-DEFA transition films -- the high school and undergraduate students of the IU DEFA Project voiced a desire to see Peter Kahane's pre-1989 youth film Vorspiel subtitled," Wagner said. "In honor of the IU DEFA Project, Helmut Morsbach has made these wishes come true. While he will personally introduce Sibylle Schönemann's Locked Up Time, which will enjoy a re-release in Germany this year, he has also sponsored the first subtitling of Vorspiel and Sammelsurium for English-speaking audiences."

Wagner said the five DEFA Dialogues programs at IU will feature one older DEFA film, Carbide and Sorrel, that deeply influenced filmmaker Peter Kahane and film critic Knut Elstermann and one new film, Windows on Monday, representing DEFA's production legacy through the Berlin-based and Eastern-oriented Ö-Filmproduktion. The other three films are rediscoveries from the "Wende" period, the time of change that surrounded the 1989-90 events leading up to the fall of the Berlin Wall and German unification.

The film and speaker series is made possible by the collaboration between IU Cinema and the DEFA Project of the IU Department of Germanic Studies. Because of the wide support for this project, films are free, subtitled and open to the public.

Nov. 14, 3 p.m., Whittenberger Auditorium. Morsbach will introduce a rarity in 35mm, Sybille Schönemann's Locked Up Time (1990), in which one of East Germany's few female filmmakers hunts down the secret police who imprisoned her in 1984. A bitter and moving reckoning with the recent past, the documentary will be rereleased in Germany this year.

Nov. 15, 7 p.m., IU Fine Arts Auditorium 015. Filmmaker Peter Kahane, whose 1990 masterpiece of East German rage and mourning, The Architects, screened in Bloomington last April, will join film critic, writer and radio personality Knut Elstermann (RadioEins Berlin), to introduce the 1963 Frank Beyer film Carbide and Sorrel. Set in the summer of 1945, the film centers on a factory worker's adventurous journey through postwar Germany in search of sorrel for his workplace. Deeply influenced by the film's clever avoidance of overt GDR propaganda, Kahane and Elstermann will lead a discussion with the audience after the screening.

Nov. 16, 7 p.m., Fine Arts Auditorium 015. DEFA Dialogues will screen Kahane's 1987 teen film Vorspiel. The title is a play on words that means "acting," "foreplay" and "prelude." Subtitled for the first time for the Bloomington community (upon request from Indiana's regional high school students, who participated in an April student symposium on DEFA film), this sensitive and, at times, comical romance portrays East German youth in the provinces. Elstermann, who is currently writing a book on youth film stars in the East, will interview Kahane after the film.

Dec. 1 and 2, 7 p.m., Fine Arts Auditorium 015. DEFA Dialogues will introduce two films in honor of the 20th anniversary of Berlin-based Ö-Filmproduktion, a production company committed to independent and documentary film in the Eastern tradition. Windows on Monday (2006) showcases the work of Germany's new "Berlin School" while Sammelsurium (1992), by DEFA's premier documentarian Volker Koepp and cameraman Thomas Plenert, explores the GDR through its lost objects. Members of IU's Germanic Studies faculty will join the audience for a discussion of the two films.

"Ultimately, it is our hope that the two newly subtitled films will be available to scholars across the U.S. at the University of Massachusetts DEFA Film Library," Wagner said. "The series illustrates the importance of returning to lost objects of cultures and times past and the work that the study of cinema can accomplish for our understanding of social and political change."