For the first time, the group will take its production to the IndyFringe Theatre (719 E. St. Clair St.) in Indianapolis the following weekend for two 8 p.m. shows on Oct. 29 and Oct. 30. 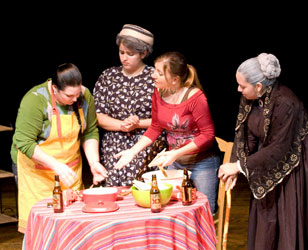 Marda Rose, an IU doctoral student in linguistics, founded Grupo de Teatro VIDA in January 2006 in an attempt to create a niche for Spanish-language theater in the heart of Bloomington.

The "VIDA" portion of the group's name forms an acronym for the words Vision, Identity, Drama and Art. Grupo de Teatro VIDA is composed of students, professors and members of the Bloomington community who want to create a Spanish cultural experience on stage. While not all members of the group are native Spanish speakers, many are bilingual, and all share a passion for the Spanish language.

"This group aims to promote language learning by involving students and native speakers of Spanish in the performance of live theater," Rose said. "One of the objectives of this group is to provide another context in which both actors and we, the directors and producers, can share a unique experience where artistry meets language."

This year's production explores the nature of relationships in four one-act plays from Spain. Each piece explores how people connect with strangers, and each demonstrates how the past and present intertwine through relationships. Three of the four plays selected this season are modern pieces, which allowed group members to communicate with the show's authors about the productions.

Loosely translated, the titles of the plays that compose Relaciones are:

Tickets for the performance can be purchased at the door prior to the show. Admission is $10 for adults and $8 for seniors and students.