Mellon Foundation awards IU $755,000 for initiative on global issues and linkages across borders

BLOOMINGTON, Ind. -- For decades, scholars have studied world cultures and historical traditions have defined nations. But with globalization, national boundaries no longer frame the story. 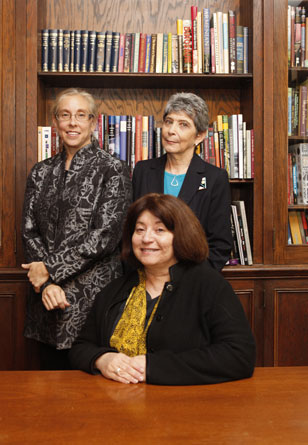 The Andrew W. Mellon Foundation, through its Universities and Their Presses Program, has awarded $755,000 to Indiana University and IU Press for a new interdisciplinary research studies initiative that focuses on global issues and their linkages across borders and to local communities.

Principal investigators Janet Rabinowitch and Hilary E. Kahn said the grant will be used to support scholarly research and publications that will develop new interdisciplinary knowledge, approaches and methods in the field of global studies and apply them toward new understanding.

"We really are seeing this as something that will help us to rethink global studies as the field is currently defined and practiced," said Kahn, associate director of the Center for the Study of Global Change and director of IU's Ph.D. Minor in Global Studies.

"Area studies have tended to focus on specific world regions with less emphasis placed on larger conceptual frameworks. But area studies scholars possess deep knowledge of those regions and the language skills that are critical to acquiring that knowledge," added Rabinowitch, director of IU Press and a distinguished editor in the field of Russian and Eastern European studies.

"What needs to be done is link the global with the local," she said.

IU is well-positioned to undertake this new project, given its extensive and historical strengths in international studies. The Bloomington campus is home to seven National Resource Centers and three programs also have been awarded Title VI funding from the U.S. Department of Education. IU offers instruction in more than 70 languages and offers a plethora of programs that support greater understanding of the world's cultures.

"Indiana University is strongly committed to being a truly international institution and to expanding our ability to pursue research and education in global studies," said IU Bloomington Provost and Executive Vice President Karen Hanson. "The Indiana Global Studies Research Project will enhance the academic mission of the university by allowing us to identify and carry out interdisciplinary scholarship that advances the broader field of global studies."

According to Kahn and Rabinowitch, global studies emerged as a discipline in the 1980s as intellectuals, professionals, and practitioners began to take note of the rapidly increasing transnational flows of people, ideas and products, and the social, political, economic and cultural consequences of these trends.

Although many universities offer graduate degree programs in global studies -- including IU, which offers a Ph.D. minor on the subject -- it lacks a disciplinary home, a framework of understanding and a set of empirical methods that students and researchers can apply across and within the disciplines to investigate the linkages between the local and transnational.

It is expected that IU Press will publish 20 new books by project participants and other researchers applying new scholarly approaches over the next five years, and that the IU Global Center program and IU Press will continue these activities afterwards.

It's easy to see globalization solely from a singular perspective, such as from the position of a community that has attracted a large population of immigrants or a significant new non-U.S. based employer. Outsourcing of jobs abroad also is a common topic among Americans. But the IU scholars said it is important to note that it goes both ways.

"There's an assumption that globalization is this entity out there that we can't do anything about, that it's this force that only impacts us -- the people on the ground and their policies and practices within nations," Kahn added.

"But this project will work toward creating an interdisciplinary framework that empirically explores how global forces emerge and often are redefined as a result of cultural, national, regional and interpersonal exchanges."