BLOOMINGTON, Ind. -- Indiana University's Department of Folklore and Ethnomusicology has been recognized as one of the top programs in its field in the Assessment of Research Doctorate Programs released by the National Research Council (NRC).

The Department of Folklore and Ethnomusicology ranks between first and third overall in the rankings of 63 academic programs in the non-performance music category based on 21 measures of quality. 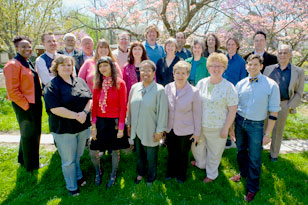 Faculty of the IU Department of Folklore and Ethnomusicology

"I think that this NRC report, ranking us at the top of a very strong group of departments, is a clear indication that Folklore and Ethnomusicology at Indiana University remains an outstanding program and a national leader," said John McDowell, chair of the department. "We are very excited that we are in this cohort of 63 outstanding departments. If you look through the list, it's a very venerable list that includes all of the prestigious universities, public and private.

"For us to come out at the top of that list is wonderful, but honestly not a surprise, because we know we have something good happening here," he added.

IU is where the study of folklore as an academic project was launched, and it remains one of the most established folklore programs in the country. IU awarded its first doctorate in folklore in 1953 and established the department 11 years later. Its graduates have gone on to found similar programs around the country, including the Center for the Study of Comparative Folklore and Mythology at the University of California at Los Angeles.

Today, the IU Department of Folklore and Ethnomusicology is home to internationally recognized scholarship on the music and culture of African-America, Africa, Asia, Latin America and the Middle East. Next year, it will host the national meeting of the American Folklore Society.

The NRC study examined more than 5,000 doctoral programs in 59 fields of study at 121 universities. It conducted similar studies in 1983 and 1995. For each program, the study includes data on faculty publications, citations and awards, student financial support and progress to degree, and faculty and student diversity.

Data were collected from public sources and through questionnaires administered in 2006. The study does not identify "best programs," as its expert advisory committee decided that no single set of criteria captures the wide variety of different interests that apply to doctoral education. Instead, it includes a range of rankings for each program, with 90 percent certainty that the program falls within that range.

It also uses two methodologies, producing different sets of rankings. "S" rankings are based on a survey of all faculty about which criteria are most important. "R" rankings are derived from surveys of a sample of faculty about the relative strength of programs in their field.

The IU department ranks between second and 12th in the "R" rankings and between first and third in the "S" rankings in "music (not performance)." Many folklore faculty and doctoral candidates in the department study music as part of their research, in addition to its ethnomusicologists.

"It is especially gratifying to see our department tops in the estimations of informed members of the professoriate," McDowell said.

In terms of research derived from faculty publications, citation rates, grants, and awards, the department was ranked between first and fourth, and between fourth and eighth in terms of diversity, as reflected through gender balance, ethnic involvement and the proportion of international students.

The complete rankings are available at https://chronicle.com/article/NRC-Rankings-Overview-Music/124746/.

The NRC is part of the National Academies, a nonprofit institution that provides science, technology and health policy advice under a congressional charter.