Film being screened at Heartland Film Festival and on public television

BLOOMINGTON, Ind. -- A documentary by an Indiana University professor that presents Vietnam War veterans and their children who have served in Iraq has been finding many audiences at film festivals and soon on television. 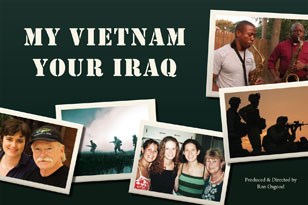 Ron Osgood's hour-length documentary, "My Vietnam Your Iraq: Eight Families, Two Generations," will be screened three times at the Heartland Film Festival in Indianapolis, beginning this Saturday (Oct. 16), and will be shown on public television stations WTTW in Chicago and WTIU in Bloomington on Veteran's Day (Nov. 11).

PBS also will be offering it to member stations nationwide and presenting it as a PBS Home Video.

The film features eight family stories of Vietnam veterans and their children, highlighting the ethnic, gender and rank diversity among veterans who served in both wars. Osgood is a professor and facilities manager in the Department of Telecommunications at IU Bloomington.

The idea for the documentary came to Osgood on Veteran's Day in 2005, while attending the dedication of Chicago's new Vietnam veteran's memorial.

"There was a formal presentation with several speakers, a military band and a flyover. The audience was pretty diverse in age and demographics, but it was easy to see that veterans made up the majority of attendees," he recalled.

"After the dedication, just several hundred yards away, I attended a rally sponsored by the Vietnam Veterans Against The War. During their forum, two young soldiers back from Iraq spoke out against the war. I was impressed by their courage to speak in this public forum," he said. "These two events convinced me to develop a documentary that connects these two wars. I knew my story would be about Vietnam veterans whose own children served in Iraq."

He worked with veterans' organizations that shared information about his project with their members, and word of mouth also led him to meeting 18 people he interviewed for his film.

"It's family stories," Osgood said of the film. "There's no voice-over narrative or on-screen text. It's all told from the point of view of the participants. My influence was that I selected the families and I edited it. But I tried to keep it balanced.

"What I really wanted to get was to the core of the relationships between a parent and their child," he added. "It was a goal of mine, to try and find out how a parent feels when their child goes off to war. Just like when they go off to college or move away, we all have concerns for their safety. But in this case, we have a veteran who has served in dangerous situations, who knows that their child is going to doing the same thing."

He also portrays how parents may have conflicting feelings about seeing their child go off to war. "Every parent wants their child to succeed in life and if they go into the military, they support their decision even if they're against the war," Osgood said. "It's a really something for people to think about."

It was honored as the best documentary at the Hardacre Film Festival. It also has been shown at gatherings of Vietnam veterans in the United States and Vietnam.

During the Vietnam War, Osgood served in the U.S. Navy from 1968 to 1972, which included three eight-month deployments onboard an aircraft carrier that provided support to the ground troops. He said his experience as a veteran helped to get people to sit down and share their feelings.

Osgood came to IU in 1987 and has been a director and producer of several award-winning television productions. He teaches classes on video production and design and documentary film. His other recent projects have included "Trouble No More: The Making of a John Mellencamp Album," which received a regional Emmy Award; "To Washington," a video for Mellencamp; and "Shirts & Skins," an award-winning documentary about pick-up basketball.

Of his current project, he said, "I think I still achieved showing the stories of the lineage in military families and how these families struggle and worry and celebrate their child's military service. I think I've articulated a number of those stories for the general public to be able to understand things that they don't know a lot about, like what it's like to serve in the military and what it's like have a child serve."