BLOOMINGTON, Ind. -- A Western power occupies Iraq but decides eventually to withdraw and grant independence. Critics object, with some suggesting Iraqis aren't ready to run their own country, and others arguing that the power is primarily looking out for its own economic and military interests.

The scenario sounds like the experience of the United States in the past decade. But as Susan Pedersen writes in this month's American Historical Review, it also describes the 1920s and early 1930s, when Britain maneuvered Iraq out of international governance under a League of Nations mandate.

In "Getting Out of Iraq -- in 1932: The League of Nations and the Road to Normative Statehood," Pedersen, a historian at Columbia University, explores how Iraq became the one mandated territory out of 14 to achieve independent statehood while under the jurisdiction of the League. 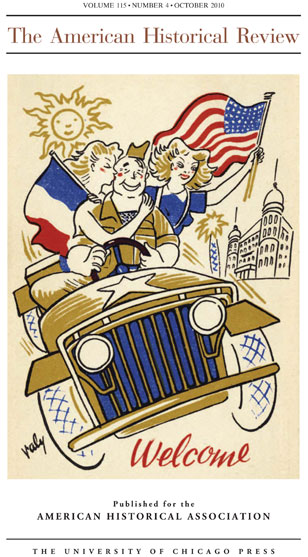 A 1940s postcard, the cover illustration for this month's American Historical Review, suggests the U.S. military's conflicted attitude toward sex and prostitution in France, a topic explored in an AHR article by Mary Louise Roberts.

Pedersen focuses on negotiations that took place over Britain's proposal to "emancipate" Iraq, particular those by the League's Permanent Mandates Commission. She describes how European rivals saw Britain as pushing for a false sort of independence as a cloak for a continued military presence and ongoing profits for the British-dominated Iraq Petroleum Co.

"Two issues -- whether that independence was a kind of imperialism in disguise and whether Iraqi nation-building would threaten non-Arab populations -- dominated," Pedersen writes. "The historical record would give an affirmative answer to both questions, yet this definition of independence prevailed anyway, in a pragmatic bargain that gave both the imperial powers and Arab nationalists some part of what they needed."

The American Historical Review is the official publication of the American Historical Association. Its editorial offices are at Indiana University Bloomington. The October issue also includes an article on the links between the 17th-century English Revolution and the origins of abolitionism, an AHR Forum on "Intimate Life and Sexuality in Mid-Twentieth-Century France" and the usual extensive book review section.

In "'Out of the Land of Bondage': The English Revolution and the Atlantic Origins of Abolition," John Donoghue broadens the notion of slavery to include "bond slavery,' in which English merchants forced the poor into bonded labor as an important new source of profit and wealth. As Old England plunged into revolution and New England into rebellion, attempts to define the Englishman's freeborn status against different forms of slavery gained new potency, he writes.

In the AHR Forum:

The American Historical Review is published five times a year by University of Chicago Press. More information, including the October 2010 issue, is available at the AHR website, https://www.americanhistoricalreview.org.