BLOOMINGTON, Ind. -- When rapper Freddie Gibbs was dumped by his record label, the Gary, Ind.-born musician responded by taking his career into his own hands: He released two free mix tape compilations online (The Miseducation of Freddie Gibbs and midwestgangstaboxframecadillacmuzik) in 2009. 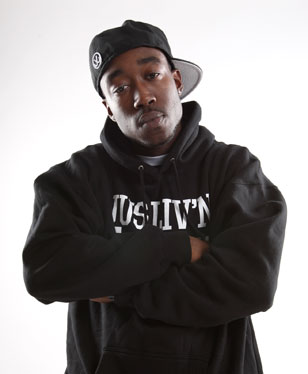 The move gained Gibbs a widespread underground audience -- and accolades for his rhymes, which have been compared with those of legendary rapper Tupac Shakur (1971-1996).

Gibbs will perform at The Bishop (123 S. Walnut St.) Nov. 11 at 8 p.m. in an evening sponsored by Live From Bloomington, a branch of Indiana University's Union Board, the governing body of the Indiana Memorial Union.

The show will also feature performances by local rappers Sonny Bamboo, R-Juna, alpha.live and the Indianapolis-based DJ MetroGnome and Rasul who will also act as emcees.

Admission is $15 for the general public or $10 with a valid IU Bloomington student ID. Tickets are available at the Buskirk-Chumley box office, 114 E. Kirkwood Ave., and online at BuskirkChumley.org.

Now based in Los Angeles, Gibbs uses graphic lyrical descriptions of life in the suburban underclass of crime-ridden Gary in raps that have created increasing buzz in the rap music industry. His work has been written up in Billboard.com and in publications such as the New Yorker, the Boston Herald, Metro in the U.K. and rap magazine XXL, among many others.

"I'm not trying to obey the rules of radio," he told Billboard.com. "I'm trying to bring gangster rap back to the forefront, like in the early '90s." That means straightforward beats with no auto tunes, and an absence of pop hooks ready-made for dance clubs.

Opening artists for the concert are each independently finding success in the regional rap scene, creating "a truly star-studded lineup," said Caroline Shurig, director of Union Board's Live from Bloomington.

Sonny Bamboo won the Indiana Hip Hop Congress battle two years in a row and the first-ever Indiana Hip Hop Battle of the Bands in 2008; alpha.live was featured as one of the top freestyle emcees by Indianapolis' weekly magazine NUVO.

"This event allows local artists to gain exposure to the nationally known Freddie Gibbs, as well as to a larger Bloomington audience," Shurig said. "Live From Bloomington wants to provide a high-quality rap concert at an affordable price, at the same time exposing people to an array of emerging rap artists."

The Indiana Memorial Union Board has brought thousands of programs to the IU community since its founding in 1909. The governing body of the Indiana Memorial Union, Union Board is composed of student directors and non-student directors who plan campus programs that entertain, educate and further the growth of the IU community. Live From Bloomington, a branch of Union Board, is celebrating its 25th year of presenting local artists to the community, as well as informing the public of hunger issues in Bloomington.