Rural life and thinking the focus of IU symposium, 'Queering the Countryside'

BLOOMINGTON, Ind. -- The role that rural life and rural thinking plays in scholarship involving gender and sexuality will be the focus of a national two-day symposium at Indiana University Bloomington called "Queering the Countryside: New Directions in Rural Queer Studies." 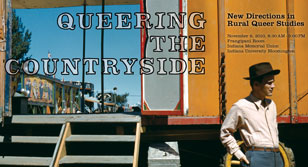 The Nov. 6-7 symposium will include a conference that is free and open to the public and an intensive half-day writing workshop that is not open to the public. The public portion, which includes a series of addresses from noted scholars, will take place on Nov. 6 from 8:30 a.m. to 5 p.m. in the Frangipani Room of the Indiana Memorial Union. The writing workshop will take place the following day.

"Part of our goal in organizing this symposium was to make people aware of just how much incredible work is being done, especially by younger scholars, many of whom are either just beginning or just completing dissertations that are really going to change the way we think about the relationship between queer life and rural life in the United States and elsewhere," said Colin Johnson, one of the event's organizers. "Of course we also wanted to draw some attention to the fact Indiana University really is leading the way where this line of investigation is concerned, and has been for some time now."

IU is home to an unusually large number of faculty and graduate students who address issues of space and place -- particularly rural non-metropolitan space and place -- in the context of their teaching and writing about gender and sexuality. This cohort includes, among others, event co-organizer Mary Gray, associate professor of communication and culture and author of Out in the Country: Youth, Media, and Queer Visibility in Rural America; co-organizer Colin Johnson, assistant professor in the Department of Gender Studies; Brian Gilley, associate professor in the Department of Anthropology and director of the First Nations Educational and Cultural Center; Scott Herring, associate professor in the Department of English; and William L. Yarber, senior director of the Rural Center for HIV/STD Prevention.

Gray said that she and Johnson "hope the event will help us to refine our understanding of what LGBT and queer life has looked like, and could look like, outside of the urban contexts. We also hope this symposium will allow us to begin to understand how queer life and rural life came to be positioned in many people's minds as categories that often feel like they're mutually exclusive."

The discussion that emerges from the two-day workshop will serve as the groundwork for an edited volume. In addition to featuring article-length versions of the talks that senior scholars will be delivering at the conference on Saturday, the edited volume will also include work by a number of the emerging scholars in attedance.

Speakers from Indiana University and universities in other states and England will address such issues as Black queer ballroom culture in Detroit and the challenge it poses to an understanding of 'urban' landscapes; the spatial implications of the concept of 'intersectionality' as it has been used in recent queer of color critique; the sexual circulations of Native American men and their relation to the state; "hixpolitation," and rise of the new right; queer inter-racialism in rural contexts and its implications for future scholarly research; and the unexpected forms of solidarity that exist between queer Black men and other working-class African-Americans living in rural areas and small towns in the American South.

For more information, visit the conference website at https://www.iub.edu/~gender/queering-the-countryside.html.