IU appoints a new chief of police for the Bloomington campus 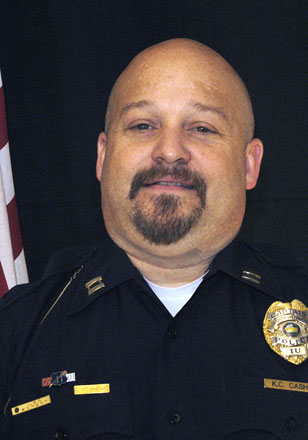 Since coming to the IUPD as a patrol officer in 1984, Cash has held progressively responsible positions culminating in his appointment as operations captain in 2001. In the nine years he has held that position, he has taken responsibility for all aspects of campus protection. He has been a visible and active collaborator with a wide variety of university offices and committees engaged in monitoring and improving the safety of the IU Bloomington campus community.

Cash holds a Bachelor of Arts and a Master of Arts, both in criminal justice, from Indiana University. He is an adjunct professor of criminal justice at Ivy Tech Community College and an instructor for the Indiana Law Enforcement Academy. He is also a 2004 graduate of the Federal Bureau of Investigation National Academy (No. 217).

"Keith's demeanor makes him the absolute right person for this particular job on a university campus, and his experience here makes him especially perfect for the IU Bloomington campus," said Jerry Minger, IU's director for public safety. "He is actively engaged with the campus community and is personally involved in many efforts to educate and optimize the safety of students, faculty, and staff."

"The IU Bloomington campus is one that has safety challenges," said Mark Bruhn, IU's associate vice president for public safety and institutional assurance. "With a campus community of over 50,000 people, including 12,000 on-campus residents, extremely busy campus and city streets, all spread over nearly 3,900 acres of geography, it is one of the largest in the Midwest."

"The learning curve in such an environment is steep," Bruhn went on. "I am tremendously pleased that Keith's valuable experience will continue to serve us, as he fills a leadership role in this critical operation."

Cash becomes a member of the senior leadership team of the Indiana University Police Department, which is headed by Minger. The organization is composed of seven campus chiefs and 122 uniformed officers who serve IU's campuses in communities across the state, each of which has its own particular character.

"Chief Cash will head an important element of our newly formed university-wide police department, and he will be a leader in IU's ongoing effort to foster cohesion and efficiency across all campuses in the areas of public safety, emergency management, environmental health and safety, physical security, cybersecurity, and privacy protection," said John Applegate, vice president for university regional affairs, planning, and policy. "I know that Keith will continue to serve IU with distinction in this position."