BLOOMINGTON, Ind. -- Hell hath no fury like a bat scorned.

Amid a backdrop of debauchery, hilarity and identity confusion, revenge is served with champagne in Indiana University Opera Theater's third production of the season. 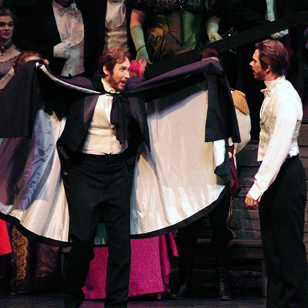 Die Fledermaus, which translates to The Bat in English, opens in late 19th-century Austria, where no characters are who they appear to be. The operetta was written by legendary composer Johann Strauss Jr. and was first performed in Vienna in 1874. The story is driven by Dr. Falke's plot for revenge on his old friend, Gabriel von Eisenstein, who had dumped him out of their carriage after a costume party. Falke, still dressed as a furry, brown bat, awoke in a public park to a jeering crowd and tarnished reputation.

The story begins when scheming Eisenstein lies to his wife, Rosalinde, to attend one last glamorous party before he must serve a two-week jail sentence for a civil offense -- a blunder he blames on his incompetent lawyer.

Little does he know, his wife and maid also received party invitations, his soon-to-be jailor is in attendance and virtually everyone is donning a disguise. Meanwhile, his wife's would-be lover is already in his jail cell, posing as Eisenstein to defend her honor. Every bizarre twist and turn unfolds according to Falke's vengeful plan.

"It's the most famous operetta of all time," Schamberger said. "It's hilarious, but not just a silly story. There are so many important themes interwoven and the music is brilliantly written."

Schamberger said he adjusted dialogue for modern enjoyment. The original German banter has been translated to English for the IU production. Singers adorned in period-style garments will sporadically reference recent developments in American pop culture.

But new additions do not mean the integrity of the show is lost, Schamberger said. The message remains the same and songs will still be sung in original German.

"Students who don't know German can enjoy the operetta naturally this way," he said. "It speaks the same no matter the language used on stage."

Elisabeth Marshall, who plays Rosalinde on stage, said Die Fledermaus is as well-crafted as it is entertaining.

"The music of this show is, in a single word, fun," she said. "From a performer's perspective, everything one needs to portray his or her character is given in Strauss' music. He is very precise with style, accenting certain syllables of words to give precise meaning to phrases and whole numbers or movements in general."

Marshall said the operetta could appeal to any audience member who appreciates humor and a happy ending.

"The music is so accessible, so exciting, and the cast members are such wonderful singers and performers," she said. "You will be entertained and maybe even moved, loving your fellow brother a bit more than when you came into the theater."

With lavish sets and costumes by IU designer C. David Higgins, the production will be conducted by guest Constantine Kitsopoulos and accompanied by the Jacobs School's Symphony Orchestra.

For more information about the Jacobs School of Music and IU Opera and Ballet Theater, see https://www.music.indiana.edu/operaballet.