WHAT: DRUMline Live
WHEN: Nov. 13, 7:30 p.m.
WHERE: IU Auditorium
TICKETS: $15-$39 for children and IU Bloomington students with a valid ID, and $30-$45 for general public, on sale now. Individual tickets may be purchased online at IUauditorium.com, in person at the IU Auditorium Box Office, as well as through Ticketmaster.com, all Ticketmaster outlets, or charge by phone at 800-745-3000. The IU Auditorium Box Office is open Monday through Friday, 10 a.m. to 5 p.m. 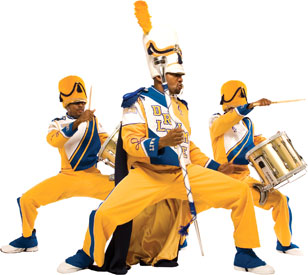 "DRUMLine Live is unlike any other event in our season," said Doug Booher, director of IU Auditorium. "This soulful and spirited marching band extravaganza is going to bring the energy of a halftime show to the Auditorium -- and the audience will leave wanting to find out where they're playing next."

The show was founded and directed by Don Roberts, who served as the executive band consultant for the 2002 film Drumline.

Roberts' experience with the Drumline movie inspired him to create a live stage version of the film featuring arrangements that mix unique dance routines with tunes from bands such as Earth, Wind, and Fire and Tower of Power mixed with current hip-hop, R&B and original compositions.

Originally created to support the college football teams, marching bands at historically black colleges and universities grew into a sport of their own and became famous for their unique dance styles and music. Each year, thousands of spectators gather to watch these bands compete at competitions such as the Big Southern Classic and the Bayou Classic.

DRUMline Live's nearly 40 drum majors, dancers and musicians are all current students or alumni of historically black colleges and universities.

Audience members are also invited to a pre-show talk on traditions of historically black colleges and universities presented by Eric Love, director of the Office of Diversity Education, and Bryan Bradford, senior associate director in the Office of Admissions, at 6:30 p.m. in the Grand Hall of the Neal Marshall Black Culture Center.

Roberts, the show's creator, has a long history of working with marching bands.

After earning a bachelor's degree in music education from Florida Agricultural and Mechanical University (where he served as a drum major, student conductor and arranger), he received a master's degree in music education from Jacksonville State University and is now pursuing a doctorate degree in administration from Argosy University. He served as associate producer and executive band consultant for the ESPN-U series "The Battle" and is the current president and musical director of Halftime Live, the official drumline of the Atlanta Hawks. He has also spent years working in the DeKalb School System in Decatur, Ga., which was recognized as one of the "Top 100 Communities in Music Education in America" in both 2005 and 2008.

For more information on DRUMLine Live and all 2010-2011 season shows at IU Auditorium visit IUauditorium.com. The website features video clips and a selection of songs from this season's performances, in addition to a direct link to the IU Auditorium Facebook Fan Page and Twitter page, whose members receive exclusive benefits throughout the year. For DRUMLine Live, Facebook fans and Twitter followers will have the opportunity to enter to win tickets to the show, a gift certificate to T.I.S. College Bookstore and T-shirts from VisitBloomington.com.