BLOOMINGTON -- Indiana University's African American Arts Institute will present its annual "A Potpourri of Arts in the African American Tradition" concert this Saturday (Nov. 6) at the Buskirk-Chumley Theater, located at 114 E. Kirkwood Ave., in downtown Bloomington. 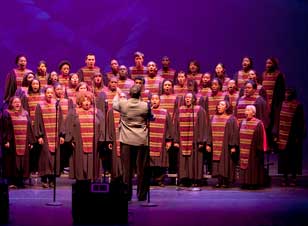 "Potpourri" was created to bring together a diverse range of African American performance styles. This year's event will be another outstanding example of the AAAI's 36 years of commitment to celebrating and fostering arts in the African American tradition and opening spaces for broader cultural diversity at IU.

The African American Choral Ensemble, under the direction of Keith McCutchen, is known for its passionate, harmonious and soulful performances. During this year's Potpourri concert, the ensemble will feature rhythm in songs, claps and symbolism. There will be a gospel tribute to the late Walter Hawkins, among a host of other selections.

The African American Dance Company, directed by Iris Rosa, will skillfully demonstrate its ingenious and imaginative interpretations enriched by cultures of the African Diaspora. The dance company is dancing to two musical selections from Mutabaruka. The creative Jamaican spoken word artist is being utilized as inspiration to explore the historical, social and political concept of being "Black and Proud" from a Black and Diasporic perspective. The dance piece will illustrate both the struggle and the release, by exploring movement sequences that reflect the attitudes and feelings of this sentiment.

The institute's current executive director is Charles E. Sykes. It is a unit of the Office of the Vice President for Diversity, Equity and Multicultural Affairs.

For tickets, call the Sunrise Box Office at 812-323-3020. The general admission tickets will cost $20 for adults and $10 for children and students (limit two per student ID). For more information about the institute, go to www.indiana.edu/~aaai.