BLOOMINGTON, Ind. -- Five faculty and one professional staff member at Indiana University were awarded Fulbright grants for the 2010-2011 academic year in late October, and two other faculty received the grants earlier in the year. The recipients represent four IU campuses -- Bloomington, Indianapolis, Southeast, South Bend -- and their research and academic activity takes place in countries across the globe, from the Caribbean to East and West Europe, Sub-Saharan Africa and Australia. 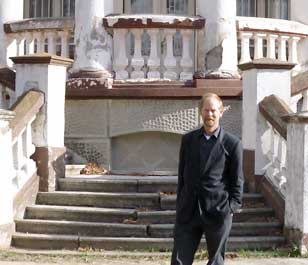 Bryan McCormick, from the IU Bloomington School of Health, Physical Education and Recreation, in front of the in front of the villa of Prince Djorde on the grounds of the Gornja Toponica psychiatric hospital in Serbia. Prince Djorde was declared insane by his younger brother Aleksandr and confined to the villa for a number of years.

This year's recipients stem from a range of departments and schools including history, philosophy, English, geography, education and health, physical education and recreation. Recipients of faculty and staff Fulbright awards for the 2010-2011 academic year are:

Two other faculty received awards which were announced earlier this year.

"In addition to their scholarly activities, an important mission for these Fulbright recipients is to act as "ambassadors" of the United States," says Patrick O'Meara, vice president for international affairs. "We are proud of the accomplishments of members of the IU community and the important role they play in strengthening ties between the United States and their host countries."

Fulbright awards for faculty and staff are managed by the Council for the International Exchange of Scholars (CIES). The CIES Core Scholar Program for faculty sends approximately 800 faculty and professionals to countries around the world. The International Education Administrators program sends participants to seminars in Germany, India, Japan and Korea to introduce them to the higher education systems of those countries and interact with fellow administrators and officials.

The Fulbright Hays program, managed by the U.S. Department of Education, selects 20-25 fellows each year to conduct long term research projects in foreign languages and area studies in countries outside Western Europe.

Please direct inquiries about the Fulbright programs to Paul Fogleman, Fulbright adviser in the Office of the Vice President for International Affairs, pfoglema@indiana.edu, (812) 855-3948.