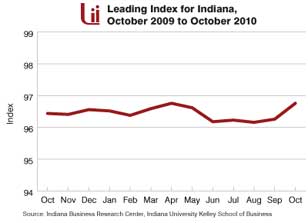 The latest LII, like October's Purchasing Managers' Index, hints that the economy may be showing some signs of life after all.

"All five of the LII components registered gains in October. Even homebuilders' sentiment about future prospects gained ground. While half a percentage point may not be considered a surge, it does signal a healthy improvement for future economic prospects," said Timothy Slaper, director of economic analysis at the Indiana Business Research Center at Indiana University's Kelley School of Business.

"A couple more months of gains like this for the LII and it will be time to chill the champagne," Slaper added.

Not all indicators of economic activity were positive, however. The Ceridian-UCLA Pulse of Commerce Index™ (PCI), a real-time measure of the flow of goods to U.S. factories, retailers and consumers, fell 0.6 percent in October. The negative month-over-month trajectory for October, typically a peak month for America's trucking industry, may be a prelude for a disappointing holiday retail season, according to the authors of the PCI.

The movement of the LII corroborates the 2011 economic forecast from the Center for Econometric Modeling and Research (CEMR) at Indiana University. The CEMR considers the chances of a double-dip recession to be slim.

"That said, gross domestic product growth is forecast to be modest -- insufficient to tame the unemployment shrew," Slaper said.

Homebuilders are less grim about the housing market. Homebuilders' confidence scratched out a 1 point rise in October, based on the National Association of Home Builders/Wells Fargo Housing Market Index (HMI).

Still, homebuilders are concerned. Slaper noted that NAHB Chief Economist David Crowe is concerned that survey participants say they have "observed absolutely no improvement in their ability to access credit to build viable new projects." The lack of available financing for new-home construction at a time when inventories of completed new homes are low is a worry because "you can't sell what you can't build."

The Dow Jones Transportation Average (DJTA) rose in October, helping to provide the LII a boost.

The Purchasing Managers Index (PMI) also gave the LII a boost. This index from the Institute of Supply Management reports that the manufacturing sector continues to expand at a faster rate and across a range of indicators, especially export growth. While the weaker dollar may improve export performance, it also results in higher commodity prices, pinching profits.

On the bright side for many of Indiana's manufacturers, some auto manufacturers are expanding capacity and making major capital investments, which also could help fabricated metal product makers.

Auto sales in October were relatively encouraging, continuing September's uptick on a seasonally adjusted basis. Year to date, auto sales are up 10.6 percent over last year. October's sales (seasonally adjusted) were at the annual rate of 12.2 million units.

If full-month sales continue their early-month start, November will also be encouraging. CNW Research reports a relatively strong start for November, with deliveries up about 12 percent. Banks and other lending institutions are finally opening their vaults and approving more auto loans. Compared to the first 10 days of November last year, approvals are up nearly 10 percent. CNW Research also reports that floor traffic for new vehicles picked-up 2.4 percent in the first week of November, indicating a "fairly solid first quarter 2011."

Like the LII, which has been, at best, flat for the last several months, the auto sector component finally gained ground. Unfilled orders for motor vehicles and parts edged up.

No significant news in terms of the interest rate spread as the federal funds rate remains near zero in accordance with the Federal Reserve's continued policy of cheap money and "quantitative easing part two" (QE2). Many economists and students of financial markets are concerned that QE2 will augur an inflationary future. While QE2 will result in inflated prices for some financial assets, weaken the dollar and increase commodity prices for businesses, prices for consumer goods will likely remain steady in the near future because of low aggregate demand for the goods and services purchased by the typical consumer.