BLOOMINGTON, Ind. -- Jeffrey R. White has been appointed academic co-chair for the Indiana University Bloomington Campus Sustainability Advisory Board, the IU Office of Sustainability and the Office of the Provost announced today.

White joins IU Deputy Vice President for Capital Projects and Facilities Paul Sullivan, who serves as the operations co-chair. White is replacing Professor of Geological Sciences Michael Hamburger as co-chair of the advisory board. 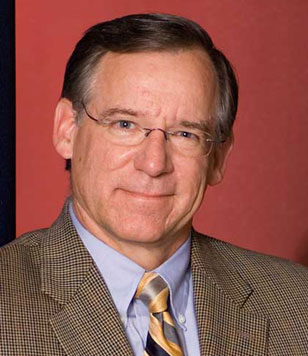 "We are indeed fortunate to have Jeff White take on the leadership of the Campus Sustainability Advisory Board," Hamburger said. "He brings a wealth of expertise in environmental science research, extensive experience with academic administration on the Bloomington campus, and a long history of engagement with sustainability issues."

Hamburger, the recent recipient of the Office of Sustainability's inaugural Outstanding Service Award, has co-chaired the Advisory Board with Sullivan since its inception in the spring of 2009.

"I look forward to joining the leadership team that has been hard at work for several years," White said. "There is so much momentum already in place -- my task is to help sharpen the focus on attainable goals. I have no illusions of filling Michael Hamburger's shoes."

In his role as a professor in SPEA and the College, White is leading several research projects addressing greenhouse gas cycling and climate feedbacks in terrestrial ecosystems and an Indiana University project establishing a new watershed research area at Bradford Woods.

In White's new role as co-chair, he will lead a board that has expanded to 38 members, with seven active working groups engaging more than 100 faculty, staff and students in leadership of sustainability initiatives on campus.