Whirlpool Corp. and Indiana University to participate in Habitat for Humanity campus build

BLOOMINGTON, Ind. -- For the second straight year, Indiana University alumni and fans returning to campus for a football game also will find a construction site of hope for a local Bloomington family.

Photo by Kip May Photography

Tora, Teresa, Bailey and Clarence Knapp of Bloomington will move into the new home being built at IU.

Starting on Sept. 29, a joint effort of students and faculty from IU and its Kelley School of Business, Habitat for Humanity of Monroe County and Whirlpool Corp. will build a house next to the home of the IU Alumni Association.

The one-week blitz outside the Virgil T. DeVault Alumni Center, 1000 E. 17th St., will culminate on Oct. 8 and provide Bloomington's Tora and Clarence Knapp and their two children with a home to call their own. After construction, the house will be moved to its permanent location elsewhere in Bloomington.

The build is part of Whirlpool-sponsored Habitat builds taking place throughout the United States in 2011. Whirlpool Corp., one of Habitat for Humanity International's top corporate partners, has sponsored more than 100 homes and served more than 82,000 families around the world since the partnership began in 1999.

"We know that poverty in our community is still a grave issue, amplifying the need for affordable homes," said Kerry Thomson, executive director of Habitat for Humanity of Monroe County. "To meet this need, we are partnering to build with the IU campus and Whirlpool, which will also serve as a great opportunity to bring future Habitat homeowners and volunteers together for a meaningful and fulfilling cause."

"Last year's campus Habitat for Humanity build was a wonderful manifestation of the focus on civic engagement that is very much a part of Indiana University Bloomington," said Provost and Executive Vice President Karen Hanson. "Our students, faculty and staff are excited to partner once again with the Whirlpool Corp. and Habitat for Humanity to help accomplish something tangible and important."

"The Kelley School emphasizes continued outreach and service among our students, especially in a hands-on opportunity so close to home," said Daniel C. Smith, dean of IU's Kelley School of Business. "Working with Whirlpool and Habitat for Humanity teaches the principle of learning through volunteering and it's a privilege to work with these organizations to complete this project."

The Knapps have been working for a long time toward their goal of home ownership. Clarence works full-time at a grocery store, while his wife pursues higher education. They saved money, reduced credit card debt and stuck to the budgets, but still found accruing enough assets for a regular mortgage to be elusive.

"We've worked very hard on our credit and Clarence has worked very hard at his career to get to this point, but we couldn't figure out to make that last piece fit in right. That's where Habitat really worked well for us," said Tora, who with her husband began working on other Habitat homes during the IU/Whirlpool build a year ago. 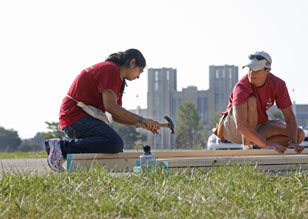 Tanzeela Sareea (left) and Lori Winebrenner worked on the Habitat for Humanity build at IU in 2010. About 375 IU students participated last year.

"Having seen the success of the build last year, it's been overwhelming for us and we're filled with joy that so many people care," Clarence, a native of Bloomington, added. "I really love the fact that I'm going to be around neighbors that I've already made friends with, who I helped to build their houses."

As someone who has watched a lot of IU football games in person or on TV, Clarence is thrilled that the build will be part of the overall Game Day experience at two IU football games. "I'm going to hope that I don't miss the nail and hit my thumb," he joked.

Roy Templin, a graduate of IU and executive vice president and chief financial officer of Whirlpool Corp., noted that "for 11 years, Whirlpool Corporation and Habitat for Humanity have helped families transform their lives. We believe strongly in Habitat's mission of giving families a hand up to help them achieve their dreams, and we hope others will join us in supporting this transformative work -- in Bloomington and beyond."

Anyone in the IU community can participate in the upcoming campus build. Those interested should contact Molly Barwick at the Kelley School's Institute for Social Impact at 812-855-4474 or KISI@indiana.edu.

About Monroe County Habitat for Humanity

Indiana University Bloomington is known internationally for outstanding research, as well as for the quality of its undergraduate and graduate programs. With 42,000 students from more than 125 countries, the campus offers a dynamic academic and cultural experience in a traditional campus environment that includes Big Ten sports and the Little 500 bicycle race. The campus has been called one of the "most wired" campuses in the United States because of its commitment to emerging technologies. For more information, go to https://www.iub.edu.

About the Kelley School of Business

For nearly 90 years -- first in Bloomington and later in Indianapolis, online, and for top companies -- IU's Kelley School of Business has prepared students to lead organizations, start companies, develop new products and services, and shape business knowledge and policy. Its programs are consistently ranked among the best in the nation, its faculty members are internationally recognized for their teaching and thought leadership, and businesses worldwide hire its highly qualified graduates. A Kelley education is always innovative and relevant so that students, faculty, and more than 92,000 alumni can become even better businesspeople, innovators and leaders. For more information, go to https://www.kelley.iu.edu/.

About Habitat for Humanity

Habitat for Humanity International is an ecumenical Christian ministry that welcomes to its work all people dedicated to the cause of eliminating poverty housing. Since its founding in 1976, Habitat has built, rehabilitated, repaired or improved more than 400,000 houses worldwide, providing simple, decent and affordable shelter for more than 2 million people. For more information, or to donate or volunteer, visit www.habitat.org.

In more than 11 years of partnership with Habitat for Humanity, Whirlpool Corp. has developed active partnerships in 22 countries with a commitment nearing $72 million. In North America, the company has donated more than 130,000 ranges and ENERGY STAR qualified refrigerators to new Habitat homes, serving 65,000 families. Additionally, Whirlpool has donated more than 25,000 products to Habitat ReStore resale outlets, helping raise $3.5 million in two years. A proud sponsor of Habitat's Jimmy & Rosalynn Carter Work Project since 2003, the company has engaged 7,000 employee volunteers, sponsored more than 100 homes around the world and served more than 16,200 families in Europe. Whirlpool plans to support the work of Habitat around the world through product donations, financial contribution or volunteerism. For more information, go to www.whirlpoolcorp.com/habitat.

Whirlpool Corp. is the world's leading manufacturer and marketer of major home appliances, with annual sales of more than $18 billion in 2010, 71,000 employees, and 66 manufacturing and technology research centers around the world. The company markets Whirlpool, Maytag, KitchenAid, Jenn-Air, Amana, Brastemp, Consul, Bauknecht and other major brand names to consumers in nearly every country around the world. Additional information about the company can be found at www.whirlpoolcorp.com.

Founded on Nov. 11, 1911, Whirlpool Corporation's time- and labor-saving appliance innovations have influenced home and family life during the last century. Driven by the belief that everyone needs a comfortable place to call home, Whirlpool Corp. is focused on improving lives one family, one home at a time.