BLOOMINGTON, Ind. -- The Indiana University Research & Technology Corp. has executed an exclusive licensing agreement with Guidewave Consulting, a start-up company created by a faculty member in the IU Bloomington School of Informatics and Computing.

The agreement being announced today (July 13) includes intellectual property that led to research that received worldwide attention last fall. Bollen and Ph.D. candidate Huina Mao were able to measure the collective public mood derived from millions of tweets to predict the rise and fall of the Dow Jones Industrial Average up to a week in advance with an accuracy approaching 90 percent. 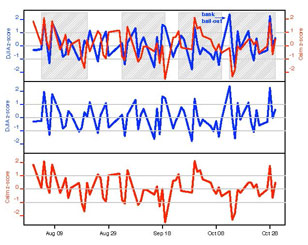 Bobby Schnabel, dean of the IU School of Informatics, said today's announcement is a good indication of the university's strong support for commercializing information technology research, which he hopes will encourage other faculty.

"We're very excited to be working with Guidewave Consulting and Indiana University to utilize and develop the sentiment analysis technology," added Paul Hawtin, founder and fund manager of Derwent Capital Markets Ltd. "Investors accept that financial markets are driven by greed and fear so it's hugely valuable to monitor and understand global sentiment in real-time."