BLOOMINGTON, Ind. -- The Indiana University School of Education will honor on Friday (Sept. 23) three of its outstanding alumni, who have, among them, had a great impact on the inclusion of students with disabilities, education technology research and education administration innovation. 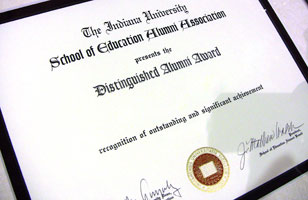 Three alumni of the IU School of Education will receive Distinguished Alumni Awards from the school on Friday (Sept. 23).

The 34th annual IU School of Education Distinguished Alumni Awards are given to individuals who hold a degree from the school and have made a lasting impact through their work since leaving the school. This year's honorees include Christine Cheney, dean of the College of Education at University of Nevada, Reno; Rob Foshay, director of research for Texas Instruments Education Technology Group; and James Mervilde, recently retired superintendent of the Washington Township school district in Indianapolis.

"The individuals we are recognizing with School of Education Distinguished Alumni Awards represent the best of what we in the field of education strive to accomplish," said IU School of Education Dean Gerardo Gonzalez. "These honorees are people who have truly excelled in their professional and civic lives. We pay tribute to their dedication and skills, which have made such a difference to so many."

Below is more information on the newest recipients of the Distinguished Alumni Award:

The IU School of Education is one of the world's premier programs for preparing tomorrow's teachers, counselors, school psychologists, educational leaders, curriculum designers and educational scholars. Its mission is to improve teaching, learning and human development in a global, diverse, rapidly changing and increasingly technological society. It has more than 68,000 alumni, including the 2011 Indiana Teacher of the Year and eight of 10 finalists for 2011. U.S. News and World Report ranks five of its degree programs in the top 10 nationally.