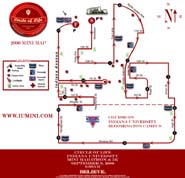 BLOOMINGTON, Ind. -- The Circle of Life Foundation, an Indiana University student organization devoted to creating one of the largest college scholarships for cancer survivors, announced plans today (Sept. 14) for a sanctioned Mini Marathon run on Sept. 9, 2006.

The route for the race will start and finish at the parking lot outside Memorial Stadium and will run along 10th Street, past IU's fraternities and sororities on North Jordan Avenue and the extension, through some residential areas on Bloomington's southeast side, past Dunn Meadow and the Indiana Memorial Union, and around Showalter Fountain. A five-kilometer run also is planned.

The event will fund the Bill Z. Littlefield Scholarship for Survivors. The scholarship, named for a Kelley School of Business faculty member who died this summer from cancer, will be awarded to a cancer survivor to attend one of IU's eight campuses.

Plans were announced at a midday call-out meeting for students and supporters in a conference room at the Kelley School of Business Graduate and Executive Education Center.

The Circle of Life Foundation was established in January by a group of IU students. Its president and chief executive officer, IU junior Kevin MacCauley, said he became attuned to the worries facing teenage cancer patients who delay their college careers after he had a personal crisis, when a benign growth was surgically removed during his sophomore year.

"When a young person hears the words, 'You have cancer,' his or her life begins a series of unexpected and unwelcome detours," said MacCauley, who is from Evansville. "As college students, we all enjoy our days of socializing, studying late into the night and creating life-enduring friendships. We want to give a young cancer patient those same life experiences."

The IU students decided that a road race would be a good way to raise money for a scholarship for a cancer survivor. Also being planned are a 5K run and a family run on the same day as the mini marathon.

Lending support to the effort is the Lance Armstrong Foundation, which has awarded a $5,000 grant to the project and donated 5,300 yellow LIVESTRONG® wristbands for distribution to event attendees. The mission of the LAF is to inspire and empower people affected by cancer.

The IU Cancer Center in Indianapolis is another supporter and was represented today by Jessica Connor, a social worker there. Connor spoke about her experience with cancer and how scholarships are important for cancer survivors.

"It's wonderful that an IU student organization has made its mission the support of a scholarship for cancer survivors who are pursuing their undergraduate degrees," said Dr. Lawrence H. Einhorn, IU Distinguished Professor of Medicine. Einhorn is credited with increasing the survival rate for testicular cancer from 10 percent to 95 percent through an innovative drug combination. He led the medical team that treated testicular cancer survivor and champion cyclist Lance Armstrong.

Dr. Stephen D. Williams, director of the Cancer Center, said, "The Indiana University Cancer Center is grateful to the Circle of Life organization for being dedicated to giving a cancer patient an opportunity to access an undergraduate education at IU. We know that they will accomplish great things in working toward this noble cause."

Dan Smith, dean of the Kelley School of Business, said the effort to remember Littlefield was appropriate given his involvement with students.

"Bill Littlefield was a special person to the school," Smith said. "Throughout the last year of his life as he fought cancer, his concerns were always about the well-being of the school and our students. He was brave and compassionate and went the extra mile for the good of others. We all miss Bill a great deal, but his memory and what he stood for will live forever in our hallways and in our culture. Bill's time with us truly made a difference."

Participants at today's event from IU included Richard McKaig, vice chancellor for student affairs and dean of students; and Frank Akaiwa, a close friend of Littlefield's and a lecturer in operations and decision technologies.

Organizers stressed that the IU Mini Marathon will be planned so as not to take any support away from other local running events which support cancer research and treatment, including Hoosiers Outrun Cancer and the Jill Behrman Run for the End Zone.

Tuxedo Brothers Management, the same planners involved in the 500 Festival Mini Marathon, have contributed their skills to the IU Mini Marathon. Other sponsors so far are Cola Cola, Iron Pit Gym and Old National Bank.

Updates about the event will be regularly posted at the IU Circle of Life's Web site at https://iumini.com. Online registration for the race also began today at the Web site.