BLOOMINGTON, Ind. -- In advance of Indiana University's opening game Saturday in the NCAA College World Series against the University of Louisville, here are some behind-the-scenes facts about the Hoosiers.

1. Indiana University -- with 110,000 students at eight campuses in the state and more than 570,000 living graduates worldwide -- was founded at Bloomington, Ind., in 1820. IU has the third-largest alumni base in the nation. Enrollment this fall at IU Bloomington (42,133) surpassed the 40,000-student mark for the fifth consecutive year.

3. The IU Bloomington Libraries were recognized by peers as the top university library in the country in 2010 by the Association of College and Research Libraries. The Bloomington campus has 19 libraries, including the Herman B Wells Main Library, named for the university's beloved former president. The libraries house several of the nation's top research collections and specialized libraries, such as the Archives of Traditional Music and the Archives of African American Music and Culture.

5. National rankings are not new for the IU baseball team or for many of IU's academic programs. Last year, U.S. News and World Report ranked IU's School of Public and Environmental Affairs as the No. 2 graduate program overall in the country, ahead of Harvard, Princeton and other major universities. The magazine rated the School of Library and Information Sciences eighth-best in the country. The Kelley School of Business, School of Education, Jacobs School of Music, Maurer School of Law and programs in the College of Arts and Sciences also are renowned and have been recognized by Bloomberg Businessweek, the Financial Times, U.S. News and other national publications.

7. The building that will house the School of Global and International Studies will be funded from part of IU's share of Big Ten Network revenue. The university will break ground on the building this spring.

9. IU physicists and computing specialists received some of the credit when scientists observed the Higgs boson particle last year in Geneva, Switzerland, a discovery that helped explain why fundamental particles have mass. IU physicists designed and built a key component of a detector used in the experiments, and IU information technologists ensured the availability of vast computing resources through the Open Science Grid.

Big Red II is housed at the Indiana University Data Center, above, on the Bloomington campus.

11. IU is a national leader in high-speed research computing networks, a position that has been strengthened now that it has acquired the fastest university-owned supercomputer in the country. Named Big Red II, the new system is capable of operating at a peak rate of one petaFLOPS, or one thousand trillion floating-point operations per second -- 25 times faster than the original Big Red first acquired in 2006.

12. In the past year, IU launched two new schools of public health. The schools, one in Bloomington and the other in Indianapolis, are the only such schools in the state and are dedicated to improving the health of Indiana's urban and rural residents.

14. IU is the home of the world-famous Kinsey Institute for Research in Sex, Gender and Reproduction, originally known as the source of the "Kinsey Reports" in the 1950s. Today's research focuses on specific issues in sexual behavior, including sexual decision-making, hook-ups and long-term relationships, condom use and errors, and hormonal influences. The research collections include artwork, films and library materials spanning centuries and cultures. 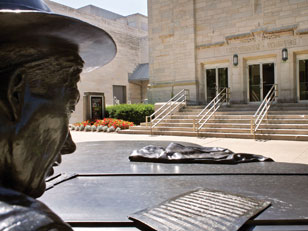 19. IU put the Big Red in the red, white and blue at the 2012 Summer Olympics in London, with seven Hoosiers representing six countries in six sports. Through their participation in the Games, where IU athletes won the 87th and 88th Olympic medals in IU history, they added to IU's rich tradition of athletic excellence here in the U.S. and abroad.

20. Earlier in the 2012-13 academic year, IU's men's soccer team won its eighth national championship. The Hoosiers' men's basketball team returned to the Sweet 16 in the NCAA tourney after becoming Big Ten champions. Several IU athletes have distinguished themselves in individual competition, including high jumper Derek Drouin, who won his fifth NCAA title, and diver Amy Cozad, who will represent the United States on the 10-meter platform at the 2013 World Championships in Barcelona.