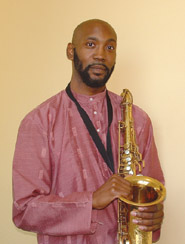 BLOOMINGTON, Ind. -- Indiana University's African American Arts Institute will present the 12th annual "A Potpourri of Arts in the African American Tradition" concert on Nov. 5 at 8 p.m. at the Buskirk-Chumley Theater, 114 E. Kirkwood Ave. in Bloomington. The institute has chosen the theme "Experience the Excitement" for this year's events, reflecting a time of new directions and fresh visions for its three performing ensembles: the African American Dance Company, IU Soul Revue and the African American Choral Ensemble.

A Potpourri of the Arts was created to bring together a diverse range of African American performance styles. The concert will feature a set of pieces by each of the institute's ensembles, with a collaboration by all three groups as the grand finale. Tickets are $15 for adults, $10 for children and students, and an advance IU student special of $5 (limit two per I.D.). They are available at the Sunrise Box Office, also at 114 E. Kirkwood Ave.

The IU Soul Revue has a fresh new face in the director's chair, Nathaneal Fareed Mahluli, who recently earned his master's degree in jazz studies from Florida State University. Mahluli has performed with the likes of Erykah Badu and led the Soul Revue in a funky, magnetic set opening for Con Funk Shun at the BCT this fall. The Potpourri performance will feature music from the 1970s and 1980s, including songs by En Vogue and Stevie Wonder.

This year is the 30th anniversary of the Choral Ensemble, whose performance will feature formally composed works by Undine Smith-Moore, as well as by director James Mumford. The ensemble, and its three a capella contemporary gospel groups, also will sing African American spirituals and contemporary gospel pieces.

The African American Dance Company's performance will include two original choreographies by director Iris Rosa. The first will explore the human condition of people of the African Diaspora set to Muta Baruka's One People, while the second will illustrate the fusion of dance and jazz, set to several Duke Ellington tunes. There also will be a live musical performance of cello and percussion to augment each piece.

The finale will feature all three ensembles, along with some special guests, to create a smashing rendition of a contemporary gospel piece set to Brazilian samba rhythms.

The African American Arts Institute is looking forward to a full year of performances and events. The institute has involved thousands of students and reached audiences locally and nationally. It has carved a niche for African American arts and culture at IU, and this year's Potpourri will be a tremendous display of the talent.