BLOOMINGTON, Ind. -- She's been at home on the grand stages of Lincoln Center and Carnegie Hall and in more intimate settings such as the Rainbow Room and Algonquin's legendary Oak Room. But Sylvia McNair has always held a special place in her heart for Indiana University. 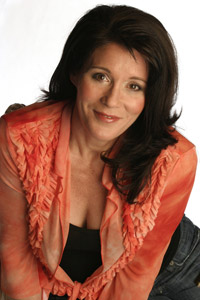 In what amounts to a homecoming of sorts, the IU alumna, two-time Grammy Award-winner and internationally renowned soprano is returning to Bloomington to join the voice faculty at the IU Jacobs School of Music. She will begin teaching this fall.

"I left Bloomington almost a quarter of a century ago and for those 24-25 years, I've had my feet on the stage. I can tell you without hesitation that's many more years than I could ever have dreamed of," McNair said. "It just feels like it's time to share with the younger folks some of the things I've experienced.

"If I've learned anything in my years as a professional, I've learned that singing from your heart and singing with joy is so important. And too often that gets lost. I certainly hope to be a voice for joy," added McNair, a native of Mansfield, Ohio.

"Sylvia has long been thought to be Indiana's favorite daughter, and although a Buckeye, this feels like a homecoming," said Jacobs School of Music Dean Gwyn Richards. "To have her creative efforts directed towards the students of the IU Jacobs School is a thrill. Future generations of artists and teachers will personally look back on this moment as a pivotal one in their professional lives and will give thanks to her for calling Bloomington home."

McNair's career has encompassed more than 70 recordings and regular guest solo performances with the leading orchestras and opera houses in America, Europe and Asia. She also has worked with an array of today's most prominent conductors, including Seiji Ozawa, Kurt Masur, Leonard Slatkin and Robert Shaw, the musician she credits with giving her the early and important opportunities that started her career.

Mary Ann Hart, chair of the Jacobs School's Voice Department, described McNair's career as "reflecting so many of the things our students hope to accomplish with their singing. Sylvia started not as a singer, but as a violinist, was Robert Shaw's soprano of choice in many oratorios, sang at the Metropolitan Opera and with important opera companies all over the world, and is now finding her greatest satisfaction in singing the American Songbook standards of Gershwin, Arlen, Berlin and so on.

"No matter what the repertoire, Sylvia has always been admired and praised for the pure beauty of her tone, but I think she would say that it is expressivity that is central to her life in music," Hart added. "For her, the ability to express and communicate through singing transcends all genres of vocal music and traditional career paths. I know that she is excited about helping our students explore great repertoire and all the places their singing might take them."

McNair has received honorary doctorates from Westminster College (1997) and IU (1998). She received a master's degree in music from IU in 1983 while studying under Distinguished Professor of Voice Virginia Zeani.

She has maintained a longstanding relationship with the Jacobs School, its faculty and administration. In 2001 she was named the school's executive adviser for outreach and, since, has lent her time and talents to fundraising and attracting outstanding faculty to her alma mater.

"These are people I've cherished for years, and now I'm going to be working with them," McNair said, adding that she has always had tremendous respect for the music school and the quality of its faculty. "I always brag about the School of Music wherever I go. It is one of the best music schools in the world. Not only did they [music faculty] let me in, they let me out...with a degree! I'm still in shock over that."

McNair is the latest in a number of superstar musicians who have recently joined the Jacobs School faculty, including pianists Arnaldo Cohen and André Watts, violinists Alexander Kerr, Jaime Laredo and Mark Kaplan, soprano Carol Vaness and mezzo-soprano Marietta Simpson.

McNair was awarded a 1993 Grammy for a recording of Handel's Semele and a 1996 Grammy for The Echoing Air: The Music of Henry Purcell. Her career highlights include performances for Pope John Paul II at the Vatican and for Hillary Clinton, as well as a recital at the U.S. Supreme Court by special invitation from Justice Sandra Day O'Connor.

The Department of Voice has been ranked first among graduate schools by U.S. News & World Report, and the Jacobs School of Music as a whole was recently listed first among the "Top Ten Voice Schools in America" by Classical Singer.

For more information about the Department of Voice, go to https://www.music.indiana.edu/department/voice/.

For more information about the IU Jacobs School of Music, go to https://www.music.indiana.edu/.