BLOOMINGTON, Ind. -- Completing 29 years on the faculty of the Indiana University Jacobs School of Music as a conductor, teacher and violinist, Professor Paul Biss will conduct his own retirement concert Wednesday, April 2, at 8 p.m. in Auer Hall, with the IU Chamber Orchestra. 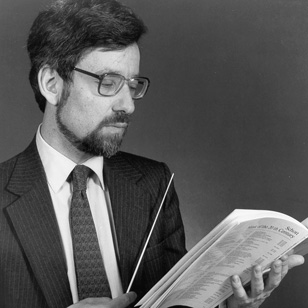 Professor Paul Biss will conduct his last concert for Indiana University on Wednesday.

In the spring of 1980, Biss conducted his first concert at IU. Since then, he has conducted regularly, with approximately 70 symphony concerts and 13 opera productions to his credit.

"Paul Biss' tenure has been marked by a love of and devotion to teaching the violin, and conducting in the orchestral program," said Lawrence Hurst, chair of the String Department in the Jacobs School. "After 29 years of service, his humaneness and devotion to artistic expression has helped form the professional lives of countless violinists who now play a leading role in the international world of music."

"Having been a resident in Bloomington a total of 35 years, I feel that my life was enriched by being a part of such a fine musical community," Biss said. "I felt incredibly privileged to join the faculty while the extraordinary people I considered as role models and mentors were still on the faculty. I will be always grateful to them for accepting me as a colleague."

When asked about the highlights of his conducting years at IU, Biss mentioned an IU Opera Theater production of Verdi's Rigoletto, a performance of Mahler's Fifth Symphony, and the 75th and 80th birthday concerts of one of his teachers, legendary violinist and IU Distinguished Professor Josef Gingold.

Biss' conducting of many orchestras on and off campus through the years has established a substantial following in the local community. Outside of his life in the Jacobs School, his compassionate nature also turned him in recent years to Bloomington's Middle Way House and Big Brothers and Sisters, where he served as a volunteer.

The son of renowned cellist Raya Garbousova, Biss was raised in DeKalb, Ill. He started piano at age 5, violin at 7 and, by 9, was traveling 60 miles away to Chicago for lessons on the violin, an instrument whose sound and lore became one of the great passions of his life.

He traveled to Bloomington as a freshman in 1962 to study with Josef Gingold. After graduation, Biss studied at the Juilliard School, obtaining his master's degree in 1968. During this time, he studied with another pedagogical legend, Ivan Galamian.

During his student days at IU, Biss met his future wife, Miriam Fried, an Israeli who also came to IU to study with Gingold. Fried went on to establish an international career as a soloist and teacher and taught at the Jacobs School of Music for many years. Biss and Fried have two sons, including pianist Jonathan who, at the age of 27, has a meteoric career as an international soloist and chamber musician.

Biss is a former member of the University of Tel Aviv, University of Akron, and MIT. He was the assistant conductor of the Akron Symphony and has conducted in Mexico, Finland and Israel. He conducts a new music ensemble in Israel.

Biss is a former member of the Berkshire Quartet and has participated in major festivals including Ravinia, Marlboro, La Jolla, Lockenhaus and Casals. He has performed as a soloist and with orchestras in North America, Europe and Israel, and has performed chamber music concerts both as a violinist and violist. He has conducted the symphonic and operatic repertoire and taught master classes in Europe, Israel and North America.

The April 2 concert will include Beethoven's Symphony No. 1, Busoni's Berceuse élégiaque, Op. 42, and Haydn's "Farewell" Symphony No. 45.