EDITORS: On Tuesday (Sept. 6) the Senate is expected to begin confirmation hearings on the nomination of John Roberts to the Supreme Court. The following Indiana University Bloomington law professor is available to offer a legal, historical and political perspective on Roberts' nomination and how it might affect the future of the American judicial system. 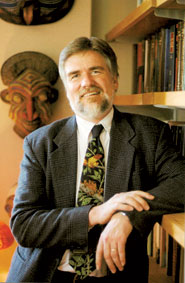 Charles Geyh says the nomination of John Roberts could indicate an unwillingness among the Republican leadership to hinge the next presidential election on Roe v. Wade.

BLOOMINGTON, Ind. -- By nominating "someone who doesn't have a record that will pull the Senate to pieces," President Bush likely has averted a political battle that could have disrupted the precarious balance between Congress and the courts, according to Charles Geyh, a professor of law and Charles Whistler faculty fellow at the Indiana University School of Law-Bloomington.

In his forthcoming book, When Courts and Congress Collide: The Struggle for Control of America's Judicial System (University of Michigan Press, 2006), Geyh argues that the intensifying partisan divide over the future of the American judicial system threatens the longstanding tradition of congressional respect for the courts' authority to decide cases without legislative interference.

Citing an emerging view that judges routinely disregard the law and decide cases in light of their personal politics, several legislators have loudly hinted that they might take action to strip the judiciary of the independence it has enjoyed for two centuries. Bush could have chosen to ramp up the festering fight between Congress and the courts by choosing a more controversial candidate, Geyh said. So why did he choose someone who has "largely flown under the radar"?

It could be that Bush is waiting to strike with a future nominee, Geyh said. Or he could be thinking ahead to the 2008 election and how it will affect his legacy.

"Although Bush and the Republican leadership talk about wanting to overturn Roe v. Wade, it may be the last thing they want. They may not want the next presidential election to rise and fall on Roe, given that 60 percent of Americans support the Supreme Court's decision," Geyh said.