BLOOMINGTON, Ind. -- The Not Too Bad Bluegrass Band has been selected to represent Indiana's vibrant tradition of bluegrass music in the nation's capital. Based in southern Indiana, the band will perform at the American Folklife Center at the Library of Congress in Washington, D.C., as part of the center's 2010 Homegrown Concert Series. 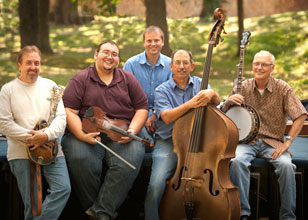 The Not Too Bad Bluegrass Band

Jon Kay, folklorist and director of Traditional Arts Indiana, will introduce the band to new audiences at their two D.C. performances. A nonprofit partnership between Indiana University and the Indiana Arts Commission, TAI's mission is to document, preserve, and promote Indiana traditional arts.

TAI is a statewide folk arts program that exists to identify, document, preserve and present Indiana's traditions. The organization and its supporters are pleased to see the Not Too Bad Bluegrass Band perform at these two high-profile venues, Kay said.

The band emerged out of a weekly jam session and has included some of the finest musicians in Indiana. Founding members Brian Lappin and Doug Harden lend their virtuoso banjo and mandolin picking to the solid bass-playing of Greg Norman, the sweet fiddling of Kent Todd, and the masterful guitar of Brady Stogdill.

Each band member traces a different path into bluegrass, through families, friends and festivals. The Not Too Bad Bluegrass Band continues to meld inspired instrumental and vocal harmonies. At performances they are always prepared to take audience requests, following in the tradition of Lester Flatt, Earl Scruggs and Bill Monroe.

Their 2010 CD, Head Full of Memories, pays tribute to classic bluegrass songs and includes original music invoking love, whiskey and memories of home. A copy of this recording, along with an interview with the band, will be deposited into the permanent collection of the Library of Congress.

The band's concerts in D.C. will take place at noon on Wednesday, Oct. 13, at the Coolidge Auditorium at the American Folklife Center and at 6 p.m. the same day at the Kennedy Center Millennium Stage. Both events are free and open to the public.

There will be a welcome home celebration at 7 p.m. on Friday, Nov. 5. The event will be held at the IU Department of Folklore and Ethnomusicology's Lecture and Performance Hall (formerly the Indiana Avenue Church of Christ) at 800 N. Indiana Ave. in Bloomington. All are welcome to attend this free event.