BLOOMINGTON, Ind. -- After a marginal increase in July, the Leading Index for Indiana (LII) continued the slide that started in April and returned to its lowest point for 2010.

Consistent with movement in the LII, the Ceridian-UCLA Pulse of Commerce Index (PCI), which is another economic measure, fell by 1 percent in August after increasing 1.7 percent in July. The PCI's authors describe the August result as discouraging, but note that the August PCI is still far from double-dip territory. 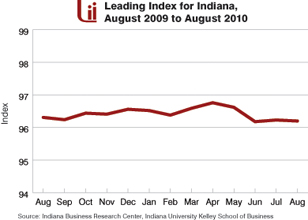 "Unlike June's LII, this month's index did not produce a warning sign for a looming recession," said Jerry Conover, director of the Indiana Business Research Center at Indiana University's Kelley School of Business. "There are some reasons, therefore, to be hopeful that there will not be a double-dip recession. For example, the Purchasing Managers Index (PMI) indicated a growing manufacturing sector for the last 13 months."

With the LII's most recent dip, the summer of 2010 ends with the LII 0.6 points from its post-recession high of 96.8 in April. Consumer sentiment also shows an anemic recovery that is losing what little momentum it had. The reading for the University of Michigan consumer sentiment survey fell from 68.9 in August to 66.6 in September. Consumers view the prospects for the national economy less favorably, thus registering the lowest sentiment value since August of last year.

"The prospects for the remainder of 2010 and 2011 give little reason to celebrate," Conover said. "Many economists and forecasters are beginning to unveil their predictions for 2011. The LII has been virtually static the last two months, comporting with many forecasts for glacial growth in 2011."

"Homebuilders have had no reason for improved optimism, given the large number of foreclosed properties and the generally gloomy job market," Conover explained. Homebuilders' confidence held constant at 13 in September according to the National Association of Home Builders/Wells Fargo Housing Market Index (HMI).

"The HMI's recent values are troubling, because values below 50 signal that more home builders consider the market 'poor' than consider it 'good,'" he said.

The HMI has not reached 50 since April of 2006. The regional HMI news was more disappointing. The Midwest HMI dropped from 15 to 12.

July's LII increase was largely attributed to the Dow Jones Transportation Average (DJTA) rising over 400 points. In August, however, most of that increase was reversed. The DJTA took back almost 75 percent of July's gain.

Restraining the LII's descent, the Purchasing Managers Index (PMI) rose in August. The PMI rose to 56.3 from 55.5 last month. The PMI has indicated expanding manufacturing activity for the last 13 months, but, like the LII, the PMI is well off its post-recession high of 60.4 in April of this year.

The interest rate spread continued to compress in August, a trend it has followed since May, providing a small amount of lift to the LII. The federal funds rate remained near zero in accordance with the Federal Reserve's stated policy. The 10-year Treasury rate dipped below 3 percent in August for the first time since April 2009.

The auto sector component of the index continues to tread water. While the Chicago Federal Reserve Bank reports that regional auto sector production rose 7.2 percent in July, the LII component for the auto sector tells a different story -- unfilled orders for motor vehicles and parts have been flat to slightly down.

August auto sales were off about 5 percent from July's and about 18 percent from the cash-for-clunker fueled August of 2009. Year to date, auto sales are 8.4 percent above last year, an annual rate of about 11.5 million units.

"If the trend for annual sales volume is over 15 million units, that might indicate that pent-up demand is increasing," Conover explained. Indeed, according to CNW Research (CNWMR.com), both pent-up demand and consumer purchase delays have been on the rise.

"Eventually, that pent-up demand will result in sales," he said. "The question is: When will consumers feel confident enough about their job and income prospects to buy a car?"