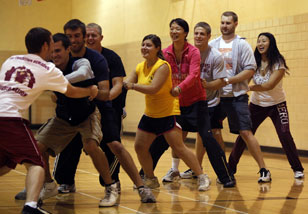 The Olympians from China will complete individualized programs of study and collaborate with HPER faculty and staff in areas of the visiting scholars' research interests.

With the Beijing Sport University (BSU) Champion Class program, hosting these elite athletes aligns with the School of HPER's strategic focus on preparing students for careers in positive public health, both locally and on a global scale. The concept of 'positive public health' is characterized by a focus on community quality of life and high-level wellness through sciences that include disciplines such as kinesiology, ergonomics, exercise science, nutrition, recreational sports, active living with parks and recreation concentrations, youth leadership development and global health.

The BSU Champion Class program provides opportunities for graduate studies to prepare world champion athletes and coaches for careers after athletic retirement. The current visiting athletes are sponsored by the China Scholarship Council for their overseas study.

During their year of study as visiting scholars, the athletes will complete individualized programs of study, including classes in sports management and marketing, athletic training, dance, martial arts and intensive English. They will also engage in opportunities to observe techniques used to assess high-level sports performance in the IU Human Performance Laboratories, as well as collaborate with HPER faculty, staff and students in the athletes' areas of graduate research.

This collaboration reflects the long, unique relationship that has existed between HPER and BSU since 1989. A formal agreement was renewed in May 2008 under the leadership of HPER Dean Robert M. Goodman. Since that time, HPER and BSU have actively exchanged faculty and students, and are currently exploring shared research in Kinesiology and sport sciences.

"HPER is strategically focused on preparing students for careers that shape health and wellness, both locally and on a global scale," Goodman said. "Thus, the year that these elite athletes will spend at HPER is a perfect alignment between HPER's new vision for positive public health, which incorporates everything from sport management, fitness and athletic training, and the BSU Champion Class program."

Beijing Sport University, founded in 1953, is one of the premier sports universities in the People's Republic of China. Since the launch of the BSU Champion Class program in 2003, more than 160 students have enrolled in this program, including 39 Olympians, 69 world champions and 53 coaches.

Chen's experience illustrates how the athletes' experiences at IU can bolster their post-athletic careers.

She wants to better understand how American and Chinese club sport approaches compare so she can further develop her thinking as she works in that market upon return to China.

"I also look forward to observing athletic training classes, to more deeply understand the process of recovery I went through following a severe injury in 2002," she said.

Additional information about the athletes:

Indiana University's School of Health, Physical Education, and Recreation (HPER) encompasses a broad spectrum of academic interests and professional fields. HPER offers nearly 50 undergraduate and advanced degree programs through our departments of Environmental Health, Applied Health Science, Kinesiology, and Recreation, Park, and Tourism Studies. To further its health and wellness initiative, Campus Recreational Sports provides sport and fitness services for the IU community and the public. More information can be found at www.hper.indiana.edu.