BLOOMINGTON, Ind. -- This year's Kuttner Quartet at the Indiana University Jacobs School of Music debuts this Sunday, Sept. 26, at 4 p.m. in the "Sunday Chamber Music in Auer" concert series kickoff. 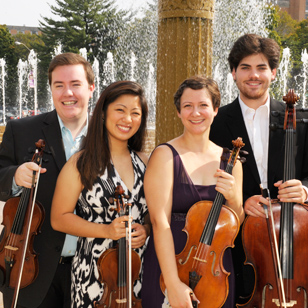 "When four people join forces to establish a single voice, a oneness in ensemble and a serious working relationship, the result is a musical 'union' amplified by four," said Jorja Fleezanis, Jacobs professor of violin and the quartet's coach this year. "And that is an exciting process to watch and be part of as a coach. I admire the commitment in this group of musicians, their intelligence to ask the most of each other and, in that spirit, meet the composer 's demands head on."

On Dec. 4 at 8 p.m. in Auer Hall, the Kuttner will perform quartets by Beethoven, Szymanowski and Prokofiev. In the spring, the group will perform a March 4 recital at IU Southeast in New Albany and at Indiana State University in Terre Haute, in addition to a second IU Bloomington recital.

About the Kuttner Quartet

Colin Sorgi, violin, is a native of San Antonio, Texas, currently pursuing his master's degree with Jaime Laredo. A recent graduate of the Peabody Conservatory, Sorgi studied with former Baltimore Symphony concertmaster Herbert Greenberg and was grand prize winner in the 2009 William Marbury Violin Competition. For four summers, Sorgi was a student at the Aspen Music Festival as a fellowship recipient and recently performed in the Lucerne Festival Academy under the baton of Pierre Boulez in Lucerne, Switzerland. A champion of contemporary music, he is the founder and artistic director of the Baltimore-based SONAR new music ensemble and has collaborated with members of Alarm Will Sound and Ensemble Intercontemporain. He is also a co-founder of the San Antonio-based River City Chamber Players.

Violinist Rena Kimura is a student of Kevork Mardirossian and hails from the Washington, D.C., area. She was the third prize winner at the 2008 International Hradec Beethoven Violin Competition and was a member of the Richmond Symphony Orchestra (Va.) for the 2007-08 season. Kimura has appeared as soloist with the National Symphony Orchestra, Landon Symphonette, Fairfax Symphony and the NSO/Kennedy Center Summer Music Institute Orchestras, and has given recitals at the Lyceum in Alexandria, Va., and the World Bank headquarters in Washington, D.C.

Violist Rose Wollman is a versatile and sought-after musician. She has played under the batons of Pierre Boulez, Fabio Luisi, Benjamin Zander, Larry Rachleff and Hugh Wolf, among others, and has performed at Carnegie Hall in New York; the KKL in Lucerne, Switzerland; Kitara Hall in Sapporo, Japan; Suntory Hall in Tokyo, Japan; Jordan Hall in Boston and Constitution Hall in Washington D.C. She spent two seasons with the Portland Symphony in Portland, Maine, and was principal viola of the Cape Cod Symphony Orchestra for one season. Wollman is a champion of new music and has given several world premieres in the Boston area and Bloomington, Ind., as well as furthering her study of new music at the Lucerne Festival Academy in Switzerland during the summer of 2010. She is currently pursuing her D.M. at the IU Jacobs School of Music with Atar Arad and holds an M.M. and a G.D. from New England Conservatory and a B.M. from the University of Illinois.

Kevin Künkel, cellist and native of the Chicago area, is a senior studying with Eric Kim. This past summer, he was principal cellist of the Schleswig-Holstein Festival Orchestra under Christoph Eschenbach, Iván Fischer and Christopher Hogwood. He has also served as principal of two Indiana University orchestras and the Midwest Young Artists Symphony Orchestra. He attended the Steans Institute and has participated in master classes with the Orion, Pacifica, Vermeer, Ying and Pro Arte Quartets, William Preucil, Yo-Yo Ma and Franz Helmerson.