Chicago-based photographer Brian Ulrich, whose work portrays contemporary consumer culture, will share stories of his life and work during an Oct. 13 visit to Indiana University-Purdue University's Herron School of Art and Design. 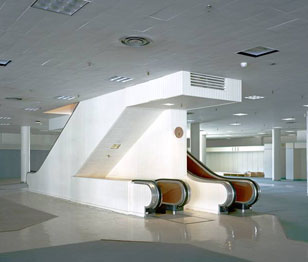 Ulrich's work is on display in major collections ranging from the Cleveland Museum of Art to the Museum of Contemporary Art in San Diego.

Following the talk at 6:30 p.m. in the Marsh and Underside galleries in Eskenazi Hall is "The Dysfunction of Dysfunction," an exhibition by the Herron Senior Photography Class. The show runs through Oct. 23.

"Over the past seven years, I have been engaged with a long-term photographic examination of the peculiarities and complexities of the consumer-dominated culture in which we live," Ulrich said. "This project, titled 'Copia,' explores not only the everyday activities of shopping, but the economic, cultural, social and political implications of commercialism and the roles we play in self-destruction, over-consumption and as targets of marketing and advertising."

Ulrich was born in 1971 in Northport, N.Y. He earned a B.F.A. in photography at the University of Akron and an M.F.A. in photography at Columbia College, Chicago. During his academic career, Ulrich often stayed after hours to sift through vast collections and archives of photography. That process helped develop his understanding of the medium and the historical perspective that informs much of his work today.

Since finishing his graduate studies in 2004, Ulrich's work has been displayed in numerous national and international exhibitions. In 2007, Photo District News magazine named Ulrich one of the year's 30 Emerging Photographers. He was awarded a John Simon Guggenheim Memorial Fellowship in 2009.

His work has been featured in the New York Times Magazine; Vice; Mother Jones; Artforum and Harper's, among others, and alongside writings by noted academics, environmentalists and activists including Bill McKibben, Michael Pollan, Jeff Madrick and Kalle Lasn.

Herron's Gallery Director Paula Katz said she has known of Ulrich's work since she lived in Chicago five years ago. "He continues to impress me with his uncanny ability to achieve the most amazing compositions while maintaining a conceptually relevant practice," Katz said. "Hearing Brian speak about his work is intriguing and an opportunity not to be missed."