BLOOMINGTON, Ind. -- Indiana University announced today (Oct. 14) that renowned opera singer Angela Brown, who honed her craft at the Jacobs School of Music, has selected IU's Archives of African American Music and Culture as the repository for her collected papers and an array of items related to her career. 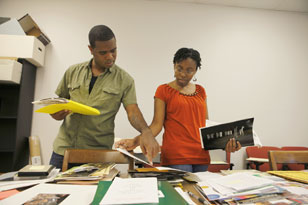 Master's student Raynetta Wiggins, right, and doctoral student Langston Colin Wilkins organize materials for the Angela Brown Collection at IU's Archives of African American Music and Culture. Both are students in the IU Department of Folklore and Ethnomusicology.

"Being from Indiana and having graduated from IU, Angela is well-known, revered and has a legacy in this state," said IU Professor of Folklore and Ethnomusicology Portia Maultsby, director of the Archives of African American Music and Culture.

The Angela Brown Collection will include recordings on cassette, videotape and DVD, photographs, personal papers such as certificates and awards, posters, programs and brochures, and magazine and newspaper articles about the singer who made her Metropolitan Opera debut as Aida in 2004.

"I am very excited that the dream of having an Angela Brown Collection is coming true through the IU Archives of African American Music and Culture," Brown said. "It is awe-inspiring to think that young people will be able to learn from my life's work as it unfolds. Hopefully, they will be inspired by my 'highs' and learn from my 'lows.' A huge thanks to the Archives of African American Music and Culture for deeming me worthy of being a part of such a prestigious collection. I am grateful and humbled for this to be in my home state of Indiana."

Maultsby is pleased to start archiving the collection while Brown is still in her 40s. As a creative artist gets older, Maultsby said, early aspects of her career may pale in significance in the artist's mind, causing some of the most interesting, formative items to be forgotten or left out.

"Angela's collection is a valuable resource because it allows us to chronicle the full development of the career of an African American opera singer -- particularly one who has maintained her participation in and allegiance to the African American musical tradition," Maultsby said. "This collection can inspire others who may have been advised to choose between the world of classical music and that of African American vernacular traditions. Angela, through her continued success, shows us that one music tradition does not have to be sacrificed for the other. It is indeed possible to be Angela Brown the gospel singer, Angela Brown the R&B or popular music singer, and Angela Brown the opera singer."

Brown's general manager, Janet Jarriel of JEJ Artists, said the archiving project will bring cohesiveness and chronology to the singer's disparate collection of career-related items. "It also will make the collection accessible to other young singers who can see Angela's route," Jarriel said. "She didn't take a straight path, and she didn't start out wanting to be an opera singer. It's interesting to see how lots of different experiences in her early years influenced her career."

Brown, who recently moved back to her hometown of Indianapolis after living in New York for years, is in Bloomington today to officially announce her donation of the collection.

She will return in two days for an Oct. 16 performance of "Opera From a Sistah's Point of View," a musical program she created to help dispel the myth of opera as a stuffy performance medium through lively commentary on opera plots and characters, arias, art songs and spirituals. Brown has said opera is for everyone, not just for "elitist audiences." The performance will take place at the Musical Arts Center at 8 p.m. For ticket information, see https://music.indiana.edu/departments/offices/box-office/index.shtml.

Before she had a career

Jarriel has known Brown since 1993, "before she had a career," when both studied at the Jacobs School of Music. At the time, Brown was a singer and Jarriel was a master's student in arts administration; the two met when then-Jacobs School Dean Charles Webb asked Jarriel to turn pages for a Brown performance in Indianapolis. The April 26, 1993, performance for the Contemporary Club of Indianapolis took place at the Fairview Presbyterian Church in Indianapolis.

"After the performance, we started talking. Angela knew that I wanted to open an artists' management agency once I finished the master's degree," Jarriel said. Over the next couple of years, the two formed a solid friendship that led to a successful working relationship when they joined forces to promote Brown's 1995 demo CD. "From that point on, we worked together exclusively," Jarriel said.

To illustrate the depth and range of Brown's career, Maultsby points to two certificates: one commemorates Brown as a Regional Finalist with the The Metropolitan Opera National Council and the other is a Certificate of Appreciation for Outstanding Service Rendered to the IU Soul Revue, for which she served as vocal coach for six years. She received both the same year, 1996.

"What this illustrates is Angela's dual musical identity and her ability to move seamlessly between two distinct musical traditions," Maultsby said. "While studying opera, she served as vocal coach for the IU Soul Revue, an ensemble specializing in black popular music. She also sang in the African American Choral Ensemble." 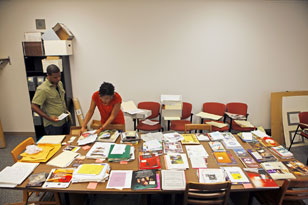 So far, the six boxes of materials sent to the archives have yielded such finds as images of Brown as Ariadne in an IU Opera Theater production; correspondence from children who sent letters after seeing Brown perform; a cassette tape of the March 2, 1997, Metropolitan Opera National Council Winners concert, at which she sang "O patria Mia" from Aida (she won); programs from performances at Carnegie Hall and Broadway; and her Indiana Governor's Arts Award.

At the Archives of African American Music and Culture in the Smith Research Center, graduate students have spent the past couple of weeks doing an initial sorting of Angela Brown's materials under the tutelage of Brenda Nelson-Strauss, head of collections.

Starting the archiving now is advantageous from an archivist's perspective because of the opportunity to evaluate and preserve materials initially, then annually, as new materials are created, Nelson-Strauss said. "I hope that on an annual basis, everything that has documented her career that year would be forwarded to us for safe keeping," Nelson-Strauss said. "I think things are less likely to fall through the cracks if we have a more active role in documenting her career."

A digital finding aid is also being created to help locate various aspects of the collection once it's archived, something that Nelson-Strauss said will also help illuminate any gaps in documentation."For example, we have very little to document her career prior to 1990," Nelson-Strauss said. "We know she started performing in the early 80s in some musicals in Indianapolis, but we don't have materials from that time. We'll be working with Angela to see what other documentation might exist."

The project has been emotional for Jarriel, who said she and Brown "grew up in this business together" as both built their careers.

"She's like an aunt to my kids," Jarriel said. "When I went through my archival files on Angela, it was very touching. I uncovered things I hadn't thought about or remembered for years; I found the first mailing we ever did, for her first CD when I was still a graduate student at IU. It's so nice to have all of these materials in one place and know someone is taking care of them and that others will have access to them. There's no better place for this collection than IU."