BLOOMINGTON, Ind. -- In 1773, Dinah Nevil crossed from New Jersey to Philadelphia with her four children and petitioned a court for emancipation, striking an early blow for freedom that has been all but forgotten in most accounts of the American and British antislavery movements.

In the latest issue of the Journal of American History, Kirsten Sword, an assistant professor of history at Indiana University Bloomington, re-examines Nevil's story along with the strategic deceptions that were practiced by abolitionists in the late 18th century. 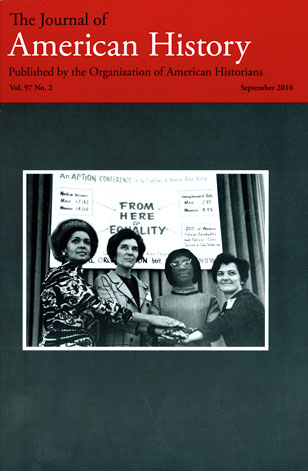 U.S. Rep. Shirley Chisholm stands with National Organization for Women leaders in the photo on the cover of the September 2010 Journal of American History. The issue includes an article about NOW's 1970s jobs campaign against Sears, Roebuck & Co.

In "Remembering Dinah Nevil," Sword describes how Quaker abolitionists tied the movement to the American Revolution and embraced nonsectarian leaders such as Benjamin Franklin and William Wilberforce. "They aligned antislavery with the national projects of the 1780s by rebranding it," she writes.

The tactic steered the founding narrative away from Dinah Nevil, who may have been of mixed African and American Indian ancestry and who sued for freedom under a Pennsylvania law prohibiting the enslavement of Indians. Her case dragged on for years, and Nevil languished in the Philadelphia workhouse, where two of her children died. Finally, after the revolution, the Quaker abolitionist leader Thomas Harrison purchased freedom for Nevil and her remaining children.

"Dinah Nevil endured," Sword writes. "She stood with those who had made her a cause even when the protection they offered seemed more like punishment . . . Asserting freedom and enduring the consequences are actions worth remembering."

In other articles in the September 2010 JAH issue:

The September issue also features an interchange discussion and a supplement of book reviews on Latino history. In the latest JAH Podcast, Associate Editor John Nieto-Phillips speaks with Virginia Sanchez Korrol, professor emerita at Brooklyn College of the City University of New York and a participant in the interchange.

For more information and links to full-text articles and the podcast, see https://www.journalofamericanhistory.org/.