McRobbie, a native of Australia, officially became a United States citizen when he took the oath of allegiance administered by Judge Sarah Evans Barker of the U.S. District Court for the Southern District of Indiana. 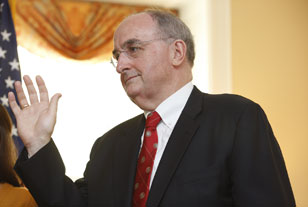 Joining McRobbie in taking the oath of citizenship were his three children, Josephine, 25, Lucien, 20, and Arabella, 19. All were born in Australia but came to the U.S. with McRobbie in 1997 when he was appointed IU's first vice president for information technology. They have lived in the U.S. ever since.

The citizenship ceremony was conducted privately during a noontime gathering of family and close friends at Bryan House on the IU Bloomington campus.

"I have long had a deep affection for the United States," McRobbie said. "This has become my home, and I am grateful to the state of Indiana and our alumni for the support and faith they have given me during my time at IU."

McRobbie said he considers himself extremely fortunate to have been given an opportunity to come to the United States and IU 14 years ago.

"I have had the opportunity to live the American Dream," he said. "It could not happen anywhere else in the world except the United States, which continues to be a meritocracy where anyone can succeed if they're willing to work hard."

McRobbie has held several positions of increasing responsibility at IU. In 2003, he took on additional responsibilities as vice president for research and oversaw a major expansion of research activities on both main campuses, IU Bloomington and IUPUI in Indianapolis.

In 2006, McRobbie was appointed interim provost and vice president for academic affairs at IU Bloomington. The following year, he was chosen by the Board of Trustees to serve as IU's 18th president.

McRobbie came to IU from the Institute of Advanced Study at the Australian National University (ANU), where he was a professor of information science and chief executive officer of the Cooperative Research Centre for Advanced Computational Systems. He earned a bachelor's degree with first class honors from the University of Queensland and a doctoral degree from ANU.