Lady Northern Invitational - Round 1 and 2 results

GLENCOE, Ill. -- With 36 holes of play in the books, the Indiana women's golf team sits in fifth place at the Lady Northern Invitational, being held at the Lake Shore Golf Club in Glencoe, Ill. 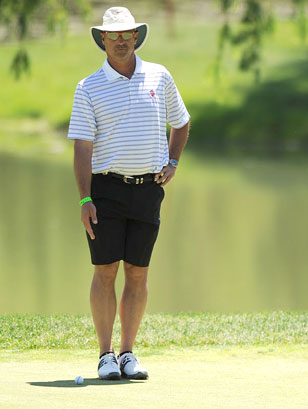 "Overall I am pleased with our play," said head coach Clint Wallman. "A lot of the things we have been working on over the course of the semester showed up on the course today, especially our patience. I feel good about where we are at."

Competing in her second collegiate tournament, freshman Lindsay Gahm is keeping pace with the field and is currently tied for first after rounds of 70 and 69 for a 5-under 139. Gahm's second-round score of 69 is the lowest round by a Hoosier this year and tied for the 12th-lowest round in school history.

"Lindsay played great," Wallman said. "She is an accomplished player and she played her game today. She is in a good position heading into the final round and I am looking for more of the same from her tomorrow."

Sophomore Kate Coons and junior Kristtini Cain are both tied for 22nd with scores of 149. Coons carded a 3-over 75 in round one and came back with a 74 in the final round of the day. Competing as an individual, Cain had a 1-over 73 over the first 18 holes and posted a 4-over 76 in round two.

Sophomore Pamela Burneski opened the day with a 75 and finished with a 6-over 78 to come into the clubhouse tied for 39th at 153. Sophomore Jacqueline Yanch is one stroke back with a 154 and is tied for 44th. Yanch started with a 76 and finished up with a 78 for the day.