BLOOMINGTON, Ind. -- In addition to the hundreds of concerts by its world-renowned faculty, students and guests, the Indiana University Jacobs School of Music will host performances by four distinguished quartets this season. The São Paulo City String Quartet kicks off the series Thursday (Oct. 14), at 8 p.m. in Auer Hall. 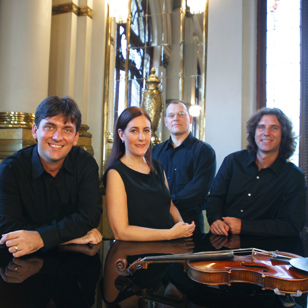 Founded in 1935, the São Paulo Quartet is among the oldest and most acclaimed ensembles of its kind in Latin America and is an official entity of the Secretary of Culture of the City of São Paulo. Members Nelson Rios and Betina Stegmann, violin; Marcelo Jaffé, viola; and Robert Suetholz, cello, will perform a program featuring works from Argentina and Brazil, including those by composers Osvaldo Lacerda, Antônio Carlos Gomes, Astor Piazzolla and Heitor Villa-Lobos. The quartet's visit to Bloomington is sponsored by the Jacobs Latin American Music Center and the Consulate General of Brazil in Chicago.

The Johannes Quartet will take the Auer Hall stage on Oct. 31 at 4 p.m.

The Johannes brings together the first American to win the Paganini Violin Competition in 24 years, Soovin Kim; a Concert Artists Guild Competition winner, violinist Jessica Lee; the principal violist of the Philadelphia Orchestra, C. J. Chang; and the principal cellist of the Los Angeles Philharmonic, Peter Stumpf. Their collaboration was forged at the Marlboro Music Festival in Vermont and was shaped and mentored by the Guarneri String Quartet, whose style was influenced by the Budapest String Quartet decades before. The Johannes Quartet is continuing the legacy of excellence.

Spring semester will find the Pacifica Quartet in Auer Hall on Jan. 23 at 4 p.m.

Recognized for its virtuosity, exuberant performance style and often daring repertory choices, the group has achieved international stature as one of the finest chamber ensembles performing today. Recent career honors include appointment as quartet-in-residence at New York's Metropolitan Museum of Art, the position held for 43 years by the Guarneri String Quartet. In 2009, the Pacifica was named Ensemble of the Year by Musical America and received the 2009 Grammy Award for Best Chamber Music Performance. The group features Simin Ganatra and Sibbi Bernhardsson, violin; Masumi Per Rostad, viola; and Brandon Vamos, cello.

The tetrad will be complete on Feb. 27, when the Orion Quartet, previously quartet-in-residence at the Jacobs School, performs at 2 p.m. in Auer Hall.

Violinists Daniel Phillips and Todd Phillips (brothers who share the first violin chair equally), violist Steven Tenenbom and cellist Timothy Eddy constitute one of the most sought-after ensembles in the United States. Since its inception, the quartet has been praised consistently for the fresh perspective and individuality it brings to performances, offering diverse programs that juxtapose classic works of the standard quartet literature with masterworks by living composers. Orion remains on the cutting edge of programming, with wide-ranging commissions from a variety of composers. The ensemble is well known for its interpretations of Beethoven's string quartets and has recorded the complete quartets for Koch International Classics.

To learn more about the IU Jacobs School of Music, visit https://music.indiana.edu.