For Indiana University Bloomington chemist Dennis Peters, there is one route to happiness: Never stray from your passions, inspire those who will be your future, and thrive on the frustrations that help you learn from your mistakes. 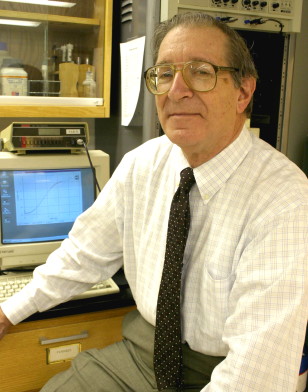 The Herman T. Briscoe Professor's ideology is familiar to his colleagues and former students.

"He is unquestionably the heart and soul of the chemistry department when it comes to matters of teaching and service," says Professor Emeritus of Chemistry Jack Crandall.

So intertwined are Peters and chemistry that his admirers might assume he had every intention of becoming a chemist, even early in his career. In fact, it was by accident.

Peters says he discovered the joys of research as an undergraduate -- but only after joining the lab of Ernest H. Swift at the California Institute of Technology. Peters learned that the act of doing research motivated him -- despite the fact that he found the subject matter challenging.

"Swift changed everything for me," Peters says. "I was not successful in school until I worked in Swift's laboratory, doing research."

Peters soon realized chemistry was his life's passion; he could not focus on anything else.

"You don't complicate life outside of your passion, you learn to function within it," he says.

Peters says he wanted to understand the world in a deep, methodical way, and chemistry helped him do that. Inspired by Swift, Peters decided to pursue a PhD in analytical chemistry from Harvard University in 1958.

At Harvard, Peters was mentored by James J. Lingane, whom Peters credits alongside Swift as a formative influence on his development as a scientist.

Peters joined the Indiana University Bloomington faculty in 1962. Peters said that he chose a career in academia because he wanted to do more than just research. He wanted to inspire students in a way his former mentors had inspired him.

"I believe Dr. Peters realized the value to be gained by an inexperienced student learning through direct interactions with a world expert," says former IU Bloomington student Justin Long. "Working one-on-one with him leaves no doubt where his true passion lies -- mentoring the future generation of chemists and scientists."

"My decision to pursue a career in chemistry was largely determined after my first semester in Dr. Peters' lab," Griffith said.

As chemistry's graduate student advisor from 1969 to 1971, Peters helped recruit the largest incoming class in the graduate department's history. When asked what he did differently, Peters noted that he was one the first to suggest sponsoring students to visit the campus.

"With good, young people, you treat them special by adapting to their likes," Peters says.

"If you ever had a problem, [Professor Peters] made the world a better place." Foley says.

"Dennis has served Indiana University tirelessly and enthusiastically in a multitude of ways for many years, and he continues to do so," Clemmer says.

Peters has received numerous awards and has authored or coauthored more than 170 publications in top scientific journals, and Peters says he plans to stay active. Thoughts of retiring? Non-existent. Peters says he worries he'd be bored.

"What would I do?" he asks. "Water the grass? Why would I stop doing what I love doing? That'd be crazy."