A place for live musical scores

Patrons of the new Indiana University Cinema will be able to experience films as they were seen — and heard — in the Roaring Twenties.

In collaboration with the renowned Indiana University Jacobs School of Music, IU Cinema will present a series of classic film screenings accompanied by live orchestral music, kicking off with a world premiere: the theatrical re-release of Metropolis (1927), a groundbreaking, dystopian science-fiction epic directed by Fritz Lang. 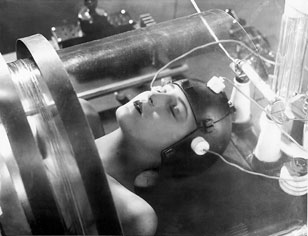 IU Cinema will kick off a series of classic silent film screenings in February 2010 with 'Metropolis' (1927). The film will be accompanied by an orchestra from IU's renowned Jacobs School of Music playing a newly arranged score.

While Metropolis has been screened in recent years with a full, 60-piece orchestra, the Feb. 19, 2011, screening at IU Cinema will feature the film's first newly arranged orchestral score for a salon orchestra.

Metropolis tells the vivid story of a futuristic city segregated into "thinkers" and "workers" and the boundary-breaking relationship that leads to a worker uprising. Just as the film premiered to a full symphony in Berlin in 1927, the Metropolis screening at IU Cinema will be complemented by live music for 14 instruments as well as supertitles. "The potential of doing world premieres here is a real honor," said Jacobs School Dean Gwyn Richards. "This will be a wonderful opportunity for our students."

"Finding time for students to do something this extensive can be a challenge," said IU Cinema Director Jon Vickers. "In the future, we hope to build it into the curriculum. Metropolis is a two-hour film, so it's as ambitious as an opera."

The IU Cinema screening will re-create the director's original vision for Metropolis, reinserting the 25 minutes of "lost footage" that was cut by Paramount for the U.S. release in 1927. (In what was called the "film find of the century," the lost footage was re-discovered in 2008, in a small museum in Buenos Aires.)

"Personally, I love silent films with live music, whether the music is traditional or new. A non-traditional score -- avant-garde or rock music -- often can make the films more accessible to new audiences," Vickers said.

"It will not be uncommon for us to have a student or faculty member write a new score for a silent film within our collection for future presentations," Vickers said. "With this comes a secondary benefit of such commissions in the form of press and credit given when the film and score travel to other cinematheques."

Jacobs professors are currently poring over the Metropolis score to determine how best to synch the music with the film. Richards said the use of old-fashioned click tracks that provide musicians with audio cues may be applied. The person leading the 14-person ensemble likely will need to have the rhythmic cues and score memorized, Richards said.

"We're working on a rehearsal schedule and personnel to be able to do this," Richards said. "There are projects and performances that Jon, uniquely, could make possible for us to do — and I'm anxious to realize some of those things."

Richards sees music and film as art forms that naturally flow into one another. Some of the most beautiful music written has been composed for film scores, he said. "A composer in Los Angeles once told me you can show an image of an urban setting and express the loneliness of the scene with a solo clarinet," Richards said. "You can show the same scene as a bustling beehive of activity by using a whole orchestra. The music shows a point of view; what your eyes see is changed by what your ears hear."

The IU Cinema will strive to become one of the best public screening rooms in the country -- eventually, with a film program to match -- offering patrons an unforgettable, unparalleled service experience. Along with outstanding programming and exhibitions, the IU Cinema will develop touring film programs, commission new silent film scores, initiate restorations and partner with established cinemas across the U.S. to build exceptional intercollegiate programs.