A place with purpose

Opening a brand-new, world-class cinema in a time of economic downturn may seem risky.

Anyone who has been affected by budget cuts or recessional ruts might wonder -- why would a state university fund arts instead of business, math or science?

To Indiana University President Michael McRobbie, a priceless academic experience is worth the expense.

Planning for the Indiana University Cinema, which is set to open in January 2011, began when McRobbie entered office in 2007. 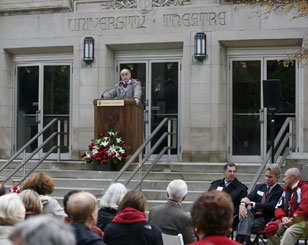 IU President Michael A. McRobbie presided over a ceremonial groundbreaking for the new IU Cinema.

"IU's reputation in the arts and humanities is also based on the superb facilities," McRobbie said in his inaugural address. "There is one art form where IU has, for decades, had a superb scholarly reputation but no facilities. This is film."

In October 2009 President McRobbie declared his cinematic dream was finally ready to come to fruition.

Before the steps of University Theatre, the gutted venue which was to become the IU Cinema, McRobbie and three other IU officials thrust shiny silver shovels into a trough of fresh soil.

"Our groundbreaking ceremony, as you can see, is largely symbolic," he said at the time.

McRobbie, wiping the dirt from his hands, explained that the project would reinforce IU's commitment to the arts which, with a rich history of music, theater and dance, will continue to be a longstanding tradition.

Jon Vickers, who was appointed director of the IU Cinema in February 2010, said the facility's possibilities are endless.

Film can enhance understanding and add perspective to any subject, he said.

"Cinema is equally as important as other art forms, and I believe there is great justification for a cinema on this campus," he said. "We're dedicated to the scholarly study of film, not only as an art form, but also as an academic tool."

Formerly the managing director of the University of Notre Dame's performing arts center, Vickers has years of cinematic experience on his résumé.

Since 1996 Vickers his wife, Jennifer Vickers, have operated the Vickers Theatre — a cinema that shows independent, foreign language and classic films and functions as an art gallery for regional artists — from a former movie theater they purchased and renovated in Three Oaks, Mich.

Now, from his temporary office in the basement of the Herman B Wells Library, Vickers devotes his days to planning and programming IU initiatives for the IU Cinema. 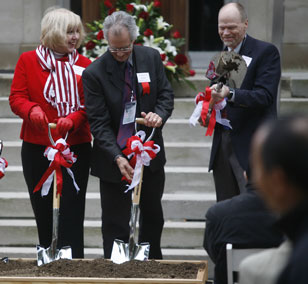 "It won't be run as a business, but as an academic unit," he said. "We're here to bolster relations on campus and enhance departmental studies."

Students from all areas of study will have the opportunity to watch films presented in the highest quality, he said. Afterward, they can discuss deeper meanings with their instructors and, on special occasions, the film's director.

"Audience members most likely will be exposed to the best viewing experience they've ever had," Vickers said. "Directors will come from all around the country and say, 'I haven't seen my film look this good since Cannes!'"

Aside from class use, the cinema will partner with different departments and schools across campus, as well as organizations in Bloomington.

Vickers said he is looking forward to working closely with the Jacobs School of Music, the IU Department of Theatre and Drama, and the Kinsey Institute for Research in Sex, Gender and Reproduction.

A full schedule of programs will be released in November.

"Art has the ability to make you think about and try to interpret life's unanswerable questions," Vickers said. "The power of art can open minds and inspire new ideas. I believe that it should be a vital part of any college experience."