A place for high-tech cinema

How can an art house cinema succeed in an era of home Blu-ray DVD technology and on-demand movies that are available faster than a bag of microwave popcorn?

Jon Vickers, director of Indiana University's new IU Cinema, said that in addition to the unparalleled customer service patrons will encounter at the new cinema, the films themselves will provide an inherent 'wow' factor because of the high-tech equipment used to show them. 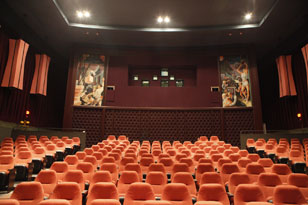 "The experience will be completely different from what can be seen in your home," Vickers said. "These films will be shown in the highest possible standards of exhibition. The place and the people who come to the IU Cinema will become part of that unique experience, I guarantee it."

With equipment and specifications rivaling those of the finest theaters in the country, the IU Cinema is expected to offer a viewing experience previously unprecedented in the Midwest region.

Although the cinema is equipped with a Sony 4K projector, most of its digital screenings will be shown using a Barco 2K digital cinema projector, identical to those used in many high-end, West Coast screening rooms.

The Barco projector will display at 2,048 pixels of horizontal resolution, believed to be the brightest digital cinema projector on the planet. The Barco, which uses Texas Instruments' trademarked Digital Light Processing technology, also will allow for 3D viewing at the cinema's January opening — with no screen modifications needed.

"With the Sony T420, we still have the capabilities of 4K cinema (4,096 pixels of horizontal resolution)," Vickers said.

The 4K presentations sometimes will require studio representation, adding the welcome dimension of expert commentary. Renowned Sony archivist Grover Crisp is scheduled to attend the cinema's November press screening of The Bridge on the River Kwai.

Vickers said the Sony T420 was selected for IU Cinema in part for its ability to stream live 4K content, which the university plans to use for scientific collaborations. Research from Cinegrid, a California-based leader in the use of the technology for scientific research, already has applied this technology successfully to stream live 4K motion pictures content across continents.

The IU Cinema will be equipped with every available HD playback system, ultimately allowing Bloomington moviegoers the opportunity to see small releases in the best-quality format and providing better access to film classics, Vickers said.

"The studios have a high percentage of their film libraries scanned digitally in 2K resolution or better. In cases where there are no quality 35mm screening prints, we have opportunities to screen these titles digitally in HD, the best format available," he said, adding that the screenings of such films would be greatly compromised without a high-quality digital cinema system.

IU Cinema also is in the process of seeking certification through the internationally recognized THX quality assurance system, an audio and visual reproduction standards system first developed by Lucasfilm to ensure accurate reproductions are presented in venues.

"While technology advances have increased access for exhibitors, these advances also have added to the challenge of getting audiences to the cinema," Vickers said.

"This is why the theatrical viewing experience — and overall experience of visiting the IU Cinema — is so important. Having one of the best equipped THX cinemas in the country should provide IU Cinema with the base to 'wow' audiences again and again."